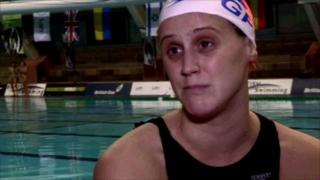 Star GB water polo player Angie Winstanley-Smith tells BBC Sport the team's qualification for the European Championships, for the first time in 15 years, is a sign of how far they have come as they prepare for next year's London Olympics.

Winstanley-Smith scored six times as Britain beat Ukraine 21-8 in Manchester to seal qualification for the 2012 Euros, which will be held in the Netherlands in January.