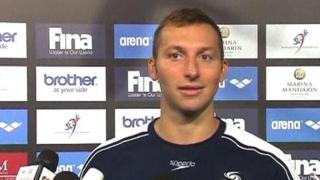 Five-time Olympic champion Ian Thorpe says he is "happy" with his display in the 100m individual medley final despite finishing seventh in the first race of his comeback.

The 29-year-old, who quit the sport five years ago, clocked a time of 56.33 seconds at the World Cup meeting in Singapore, while South African Chad Le Clos, 19, won the race in 53.06 secs.

The Australian understands why his fans might be impatient over his comeback, but insists he is pleased with the steady progress he has made. (UK only).