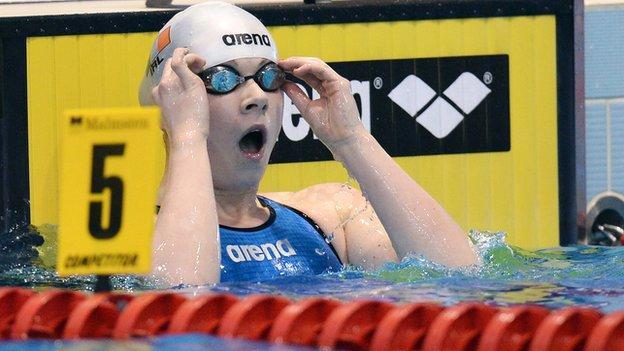 McMahon recorded a time of 1:08.72, just outside the Irish record time of 1:08.37 which she set to seal her place at the London Olympics on Tuesday.

McMahon withdrew from the 200m individual medley heats in order to concentrate on the breaststroke final.

Melanie Nocher was seventh in her 100m backstroke heat and failed to qualify.

Her time of 1:03.43 saw her take 22nd place overall, well off what she needed to make the semi-finals.

McMahon and Nocher had already secured their place at the 2012 Games after producing brilliant swims on Tuesday.

The Portaferry teenager clocked 1:08.37 in both the morning and afternoon.

Nocher then produced the race of her life to finish fifth in the 200m backstroke final in 2:10.75 - .09secs inside the London standard.

The Belfast woman's time cut .93 off her Irish record set in Monday's semi-finals and her swim was a tremendous performance under intense pressure.

It was Nocher's last crack at the Olympic mark in the event with the deadline for qualification coming up next week [31 May].

The Northern Irishwoman went out hard and was close to a medal position before fading somewhat over the last 50 metres.

However, she hung on bravely to just squeeze under the Olympic mark.

Dubliner Karl Burdis posted a time of 25.87 in the men's 50m backstroke heats and that was good enough for the Irish record holder to advance to the semi-finals in 15th place.

He bettered that time in the semi-finals with 25.78 but did not make the finals cut.

Nuala Murphy pulled out of the women's 800m freestyle to concentrate on the relays, which take place later this week.

Grainne Murphy and Barry Murphy, who have both already achieved the qualification standard for the Olympics, have opted not to compete in the Hungary event which is taking place from 21-28 May.