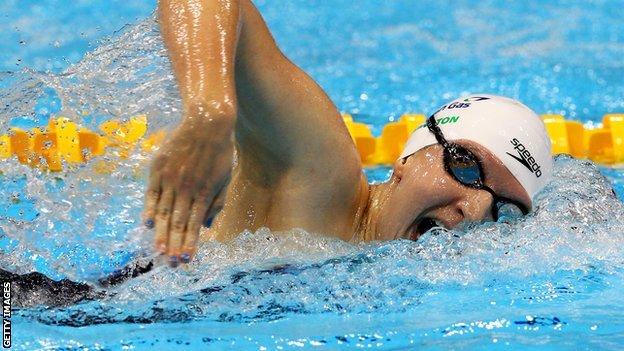 Hannah Miley won the 200m individual medley on day two of the Barcelona leg of the Mare Nostrum series as Britain finished with 29 medals.

Her gold was one of 16 GB medals on day two, including wins for Georgia Davies in the 50m backstroke and Michael Jamieson in the 200m breaststroke

GB finished with eight golds in all.

The gold for Davies in the non-Olympic 50m backstroke dicipline followed similar success in 100m backstroke on day one, while Miley added to her opening-day gold in the 400m medley.

Goddard was also second in the 200 metres breaststroke, behind Jamieson, while Andrew Willis took bronze as Britain monopolised the podium places.

Adlington surrendered the chance to claim her second gold when, as planned, she withdrew from the 400m freestyle final, after setting a time of 4:09.21.

Swansea ITC's Jazmin Carlin finished second in the race, to take the silver medal with a time of 4:10.52.

Sophie Allen won silver in the 200m individual medley, behind Miley, to add to a silver at the European Championships less than two weeks ago.

Lowe also finished among the medals in the 50m butterfly, taking third place and she won a bronze in the 100m butterfly.

There was also a bronze for Aimee Wilmott behind Miley in the 400m medley while Miley also won a bronze in the 200m breaststroke.