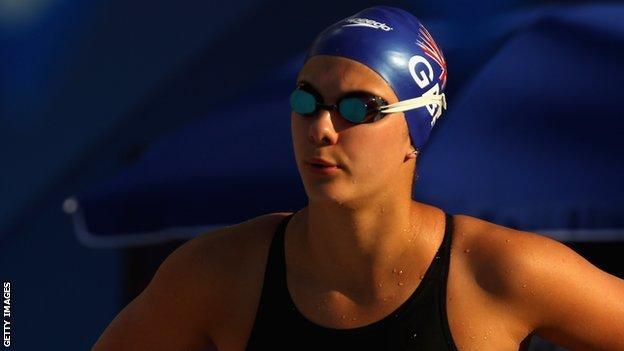 Aimee Willmott was in impressive form to win the 400m individual medley at the ASA National Championships.

The Middlesbrough swimmer won her final in four minutes 38.68 seconds, 10 seconds ahead of Lucy Spencer.

Jack Marriott won the 50m butterfly just ahead of Antony James in a photo finish.

The other winners on the final day in Sheffield were Jemma Lowe, Andrew Willis, Adam Brown, Lucy Ellis, Lewis Coleman and Dan Fogg.

Willmott's victory came after she had recorded her fastest ever time in a heat, 4:40.79, during the morning session.

Willmott's father, Stuart, finished 15th in the men's 400m medley at the Los Angeles Olympics in 1984.

It is the 19-year-old's final race before London 2012, when she is due to compete 28 years to the day since her father Stuart swam in the same event at the Los Angeles Olympics.

"This week I've had quite a few hard sessions so to do that time tonight, I'm really chuffed," said Willmott.

"I've been getting in the pool a bit later to get used to swimming fast at 10 o'clock and that's starting to pay off.

"Tonight I knew I would be tired after that morning swim so I just had to get in and give it everything. It really hurt but I'm really happy with the time."

The final selection for the British squad of 44, the largest ever for an Olympics, will be ratified on Sunday.