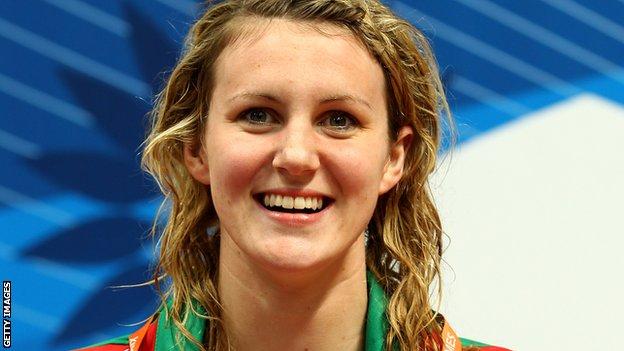 Jazz Carlin has returned to the Great Britain swimming team for the World Short Course Championships in Istanbul on 12-16 December.

The Swansea-based swimmer missed out on a GB place for the Olympics.

She is joined by fellow Welsh swimmers Jemma Lowe, Georgia Davies and Ieuan Lloyd in the 19-strong team.

Carlin returns to the fold after missing out on a place in the individual 200m and the 4x200m squad at London 2012.

The 22-year-old is a World and European relay bronze medallist and a winner of a silver at the 2010 Commonwealth Games.

"Any time our swimmers are up against the best in the world it's an important event," said GB head coach David McNulty.

"Not everyone will be tapered and some swimmers will be in the hard stage of their training cycle, so they will have to swim tough but I know our swimmers will give their best on the day.

"We will go there as a strong team and give everything we can to the meet. It will be an exciting start to the new quadrennial cycle for the team."

Swimmers Hannah Miley, Robbie Renwick, Fran Halsall and Olympic silver medallist Michael Jamieson, who all competed at 2012, will take part in the event in Turkey.

Youngsters Matthew Johnson (City of Sheffield) and Georgia Hohmann (Nova Centurion) will compete at their first international championships, both having made their senior debut at for Great Britain at the US Open which took place in August this year.