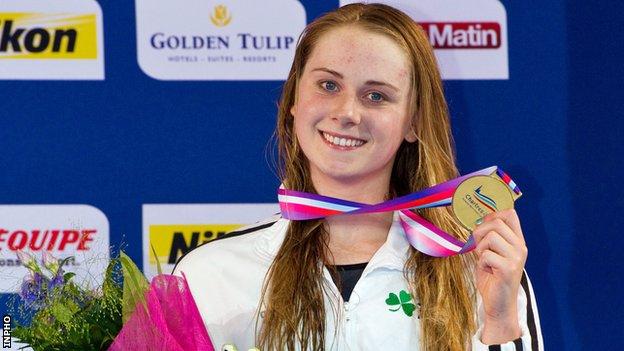 Northern Ireland swimmer Sycerika McMahon clinched an impressive bronze medal in the 50m breaststroke on the opening day of the European Short Course Championships in France.

McMahon cut half a second off the Irish record in the heats and then went faster in the semi-finals and final.

McMahon is competing in five further events in Chartres.

The Irish team member clocked 30.88 seconds to finish third fastest in the heats as she set a new Irish record and then improved that time to 30.56 in the semi-final.

That left her third fastest qualifier for the final and while was in contention for most of the decider, she finished behind Chocova and Denmark's Rikke Moeller Pedersen.

Chocova's final time exactly matched her semi-final clocking while the Dane (30.24) was .10secs ahead of McMahon, who was comfortably clear of fourth-placed Norwegian Henriette Brekke (30.66).

In all, McMahon's three swims trimmed more than a second off Fiona Doyle's previous Irish record.

The Northern Ireland swimmer won a silver medal in the event at the European Long Course Championships in Hungary in May before going on to compete at the Olympics.

The 50m breaststroke bronze medallist was joined by Jane Roberts, Shani Stallard and Clodagh Flood in the Irish quartet.

Barry Murphy will be Ireland's other medal hope in France but Melanie Nocher and Grainne Murphy are both missing the championships.

Neither Nocher or Murphy have competed since illness affected their performances at the London Olympics.