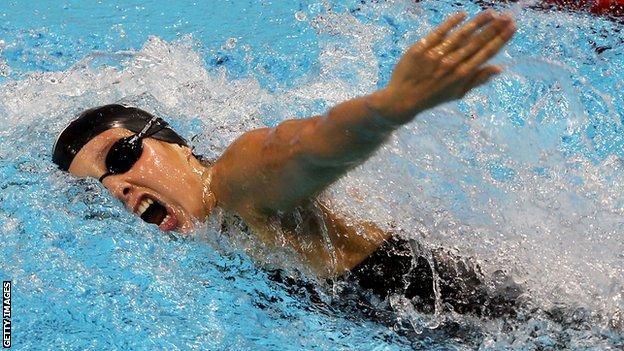 Jackson won bronze in the 400m freestyle at the 2008 Beijing Olympics and broke the world record at the same distance the following year.

"I feel so lucky to have been able to compete to an international level for so many years and to have been to three Olympic Games," the 26-year old said.

She first represented Great Britain in 2001 as a junior.

Jackson's success in the pool comes in spite of a number of health problems, including asthma.

She competed in her first Olympic games in Athens in 2004, but failed to get past the heats.

Two years later she won silver medals at 400m and 800m at the Commonwealth Games in Melbourne.

At the Beijing Games she was beaten into third place by American Katie Hoff and team-mate Rebecca Adlington, who won gold.

But she went on to beat Adlington at the British championships the following year, setting a new world record in the process.

"I'm now looking at new opportunities to start a Swim Academy and begin a brand new career in events," she said.

"To be a three-time Olympian, an Olympic, world, European and Commonwealth medallist, and to have set a world record over 400m freestyle in 2009 are all outstanding achievements," he said.

"On behalf of all at British Swimming I would like to wish Jo all the best in her new endeavours."