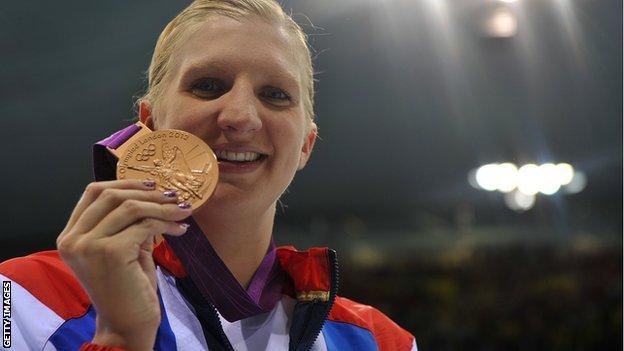 Double Olympic gold medallist Rebecca Adlington is set to make a major announcement at a news conference on Tuesday, 5 February.

The 23-year-old, who has hinted at retirement, won double gold in Beijing, but had to settle for bronze in London.

She recently criticised the governing body British Swimming, saying she felt "insulted" by a review into the team's under-performance at the London Games.

She claimed two of only three medals won by GB, who had a target of five.

The Mansfield-born swimmer has also been critical of the delay in appointing a new head coach following the departure of Dennis Pursley after the Games in August.

"Why is it taking so long? We've been dying for them to appoint a head coach for months," Adlington told BBC Sport in December.

"Surely, it would make more sense for the head coach to be appointed before the review."

British Swimming is also without a national performance director since Michael Scott resigned following the review into London 2012.

While Adlington, whose 2008 Beijing triumphs came in the 400m and 800m freestyle, has decided against competing at Rio 2016, the swimmer has not made public any decision over competing at the 2014 Commonwealth Games in Glasgow.

Her coach Bill Furniss has guided her since the age of 12, and is expected to be key to any decision on her future.

He has also been heavily linked with the GB head coach role.