Adlington became Britain's first female to win Olympic gold in the pool in 48 years, with 400m and 800m freestyle victories at the 2008 Beijing Games.

"I love swimming but as a competitive element and elite athlete I won't compete any more," she said.

"I have achieved everything I wanted to," she said.

"Some people want to milk it all they can. I've always said I wanted to finish on a high, despite my love of the sport."

"Becky Adlington's unforgettable success in Beijing inspired a generation to get in the pool and swim," he said.

"Her down-to-earth personality and remarkable career achievements have made her a national treasure."

BOA chief Executive Andy Hunt added: "Through her remarkable talent and tireless work ethic, Becky Adlington has set a standard of excellence that future generations of Team GB athletes will aspire to reach.

"She represents the very best of what British sport, and the Olympic movement, are all about." 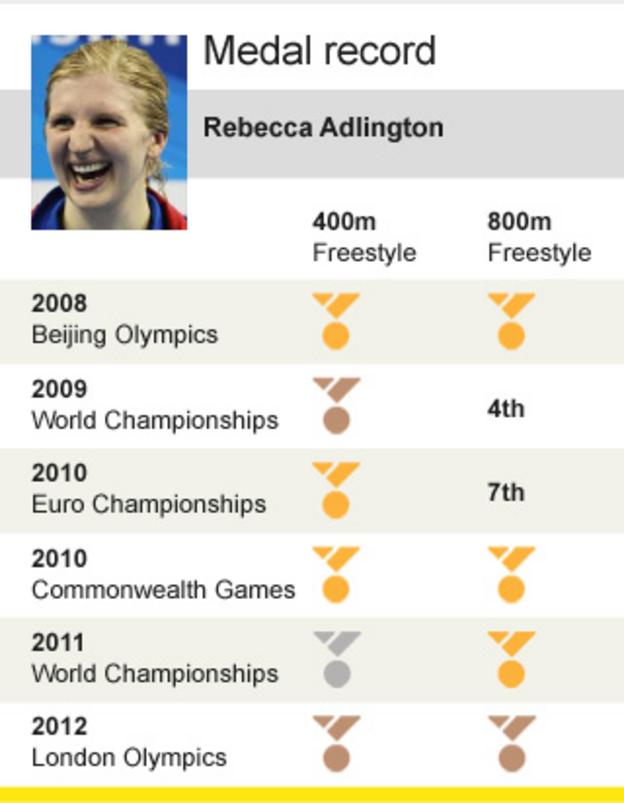 Adlington said in September that she would not compete at the Rio Olympics in 2016, feeling that as a 27-year-old she would be too old to be competitive.

In October, she undertook a 280-mile bike ride in Zambia with Olympic bronze medallist Jo Jackson, former Commonwealth champion Ross Davenport and ex-swimmer Mel Marshall to raise £50,000 for Sport in Action, a non-governmental organisation that looks to inspire change in impoverished communities through sport.

She says that her work outside the pool has taken on a greater significance, and that she no longer has the same motivation to compete at elite level.

"I had to look at things, take a break and see how I felt when I came back. It didn't feel the same getting back into training and it felt like time," she said.

"I hate the words 'retired' so I don't want to say it because I would never retire from swimming all together, but as an elite athlete I wont be competing any more and I won't be at the World Championships this year."

In retirement, Adlington will head up the "Rebecca Adlington Swim Stars" programme to encourage youngsters to take up swimming.

"I want to launch my own learn to swim programme and I've always said that if I've inspired one kid to get in the pool then it would make my year and hopefully I can continue to do that," she said.

"As unpretentious as beans on toast, but with a cordon bleu talent, the retiring Becky Adlington has been a huge asset to British Swimming in her short career. Her expressed desire now is to carry on working in the sport, with the goal of getting every child in Britain into a pool and able to swim 25m by the time they leave primary education. Ambitious, but she has the clout and charisma to help make it happen."

"I want to create a deeper legacy. I want all children when they leave school to be able to swim 25m - that's my ambition in life."

According to research from the Amateur Swimming Association (ASA) released last May, a third of children - 200,000 youngsters - in England cannot swim

The research suggested many had never had a school swimming lesson, despite its being part of the national curriculum for seven-to-11-year-olds to be taught to swim 25m unaided.

In December, Adlington criticised British Swimming's review into the team's under-performance at the London Games, telling the Times (subscription) she felt "insulted, disheartened and saddened by the way they have ignored us, the swimmers."

She believes that the appointment of her former coach Bill Furniss as the new head coach at British Swimming will improve the relationship between athletes and the governing body, and hopes to work with Furniss mentoring future elite swimmers.

"He knows enough about the sport and has been on so many teams that he's seen it all first-hand, so if there was anyone suitable for the role it is him," she said.

"Hopefully I'll still have a relationship with him where I can pass on my perspective as a swimmer.

"I'd love to stay involved in all sorts of ways. Hopefully I can help the younger guys coming up because I have been through it all."