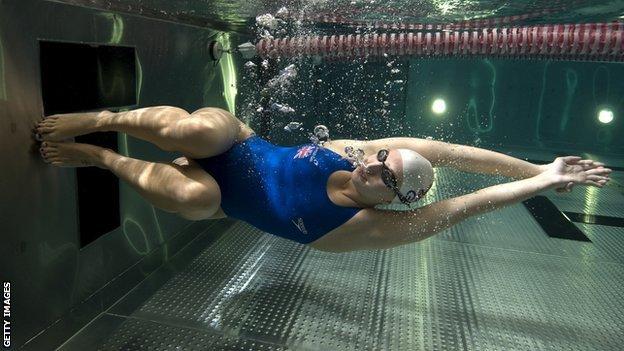 As unpretentious as beans on toast, but with a cordon bleu talent, has been a huge asset to British Swimming in her short career.

It is hard to imagine a more likeable heroine. Deeply rooted in family, hard working and quietly ambitious, she was as happy talking about the love of her mum's Yorkshire puddings and her secret desire for Jimmy Choo shoes as she was about her achievements in the pool.

She'd served notice of her potential as a 15-year-old taking a silver medal in the 800m freestyle at the 2004 British Championships, then going one better in 2006.

A silver medal in the 2006 European Championships re-enforced the view of swimming insiders that Mansfield's finest had genuine international prospects, but after a disappointing showing in the 800m freestyle at the 2007 Worlds few could have anticipated the remarkable double in Beijing.

It was generally considered that the 800m was her best medal chance by far: Britain had not had an Olympic swimming champion since Adrian Moorhouse in Seoul in 1988.

No British woman had won an Olympic gold since Anita Lonsbrough in Rome in 1960, and frankly although Adlington had outqualified her in an outstanding time in reaching the final, it was friend and team-mate Jo Jackson who carried the greater weight of expectation.

What a shock then, written large on her face, when Adlington looked up to see the result. The initial elation was swiftly followed by a hand over the mouth in disbelief.

She had touched out Katie Hoff of the United States and was the Olympic champion. On the crest of a wave, in the 800m freestyle she went one better, dominating the final stages of the race and smashing one of swimming's most enduring world records in claiming a golden double.

The 19-year-old was a household name and in demand. She'd helped inspire the British team to its greatest performance at the Olympics in 100 years.

She'd become a role model for teenage girls, with an outgoing, fun-loving personality and an obvious warmth, quick to thank her mum, dad and coaches, emphasising that hers wasn't instant, fleeting X-Factor fame but had been wrought of countless hours of hard work and dedication.

The homecoming was quite an event: the town mayor gave her a pair of those designer shoes, in gold of course, for the open-top bus ride, but not all the attention that came with her success was welcome.

The sort to wear her heart on her sleeve, she was upset and annoyed at the disparaging remarks made about her appearance by the comedian Frankie Boyle during an episode of Mock the Week, which earned him a rebuke from the BBC Trust.

Her pursuit of the complaint about that joke showed both a steely edge to her character and a certain vulnerability. Some might have shrugged it off but she fought for a principle.

The shortcomings in the British Swimming squad were masked by Adlington's performances, which helped the organisation hit its medal targets, and keep a sustained level of funding for the London Games.

"I think she has done an incredible job for British Swimming. Becky is similar to the great distance freestyle swimmer [four-time US Olympic champion] Janet Evans and when we speak of an athlete in the same breath as Evans, we're speaking of one in the highest regard."

The fruits of that investment, however, were thin on the ground last summer when the swimming squad under-performed. Adlington carried their biggest hopes, but could not repeat the golden haul of Beijing.

Expectations were unfairly high and, in any other context, two bronze medals would have been a triumph. But the rapturous reception from the home crowd as she celebrated those medals underlined the high esteem in which she is held by the sporting public, and her insistence that the London medals mean just as much to her is genuinely felt.

By any assessment she is one of the greatest swimmers Britain has ever produced, perhaps the greatest. Her loss to competitive sport will also be felt by the British Olympic Association. A willing ambassador for all things 2012, her parents were also regular contributors at media gatherings, happy to add their side of the story, talk about the role of parents and the support needed to create a champion.

Her expressed desire now is to carry on working in the sport, with the goal of getting every child in Britain into a pool and able to swim 25m by the time they leave primary education.

Ambitious, but she has the clout and charisma to help make it happen.