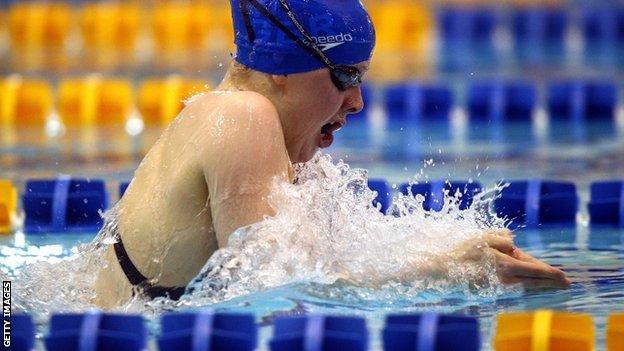 Siobhan-Marie O'Connor eclipsed Hannah Miley to win the 200m individual medley as a host of Olympians returned to the water at the Leeds international meet.

O'Connor won the race in an English record time of two minutes 10.53 seconds with Miley in second place.

The 18-year-old did not swim to top spot but Jonathan Fox added to his Paralympic title in the mixed 100m backstroke.

There was also a return to form as Jazz Carlin, who missed out on London 2012, triumphed in the 800m freestyle.

The Welsh swimmer was competing for the first time without her long-time rival Rebecca Adlington, who retired from swimming after winning double bronze at the London Games.

British swimmers fell two short of their medal target of five at the 2012 London Olympics. A new era dawns silver medallist Michael Jamieson is the only 2012 medallist competing in Leeds. Rebecca Adlington - who won two bronze medals in London - has retired.

"Having Becky to race was always great because she was always pushing me in the first half of the race where I normally struggle," said Carlin, who won in a personal best time of 8:24.42.

"But tonight I knew there were a lot of people who wanted me to swim well.

"When you put so much time and effort into supporting something you love doing, when you get the disappointments it's hard to find the reasons why you are still going out every day doing the training.

"It obviously crossed my mind [quitting] but I am quite a determined person so I always wanted to get back in and I knew there was more to come."

O'Connor also proved she had more to offer as she ended Miley's dominance in the domestic medley events.

O'Connor's time is now second only to Ye Shiwen, the double Olympic champion, in the world's best times this season.

"It's good to just post a good time and gives me a boost of confidence for the rest of the year," said O'Connor.

Miley was pleased with her efforts which also saw her finish third in the 800m freestyle, insisting the focus is on this summer's World Championships in Barcelona.

I felt rough. The 100m freestyle is a work in progress

"I felt rough," said Halsall. "The 100 free is a work in progress at the moment, bits have not been going well."

In the men's events, Joe Roebuck came from seventh at the halfway point to set a new personal best of 53.07secs in the 100m butterfly,

The four-day event at the John Charles Centre for Sport is the first long-course international competition for the Britons since the London Games.

Scot Michael Jamieson, who won Olympic silver in the 200m breaststroke, will return to action on Friday.