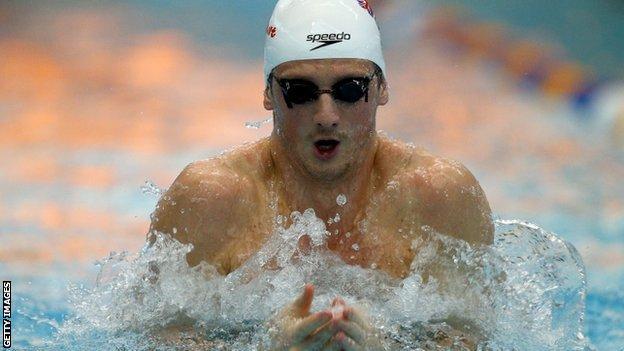 Olympic silver medallist Michael Jamieson returned to action with victory in the 100m breaststroke at the international meeting in Leeds.

It had been a slow start for Jamieson who finished joint eighth in the morning heats and had to take part in a swim-off with Russell Smith to earn his place in the final.

That placed him in lane eight from where a swimmer has no awareness of what is happening among the fastest qualifiers in the centre of the pool.

But the 24-year-old held off a fast-finishing Craig Steeples, saying afterwards: "I'm pretty happy with that, especially after an error of judgement in the heats.

British swimmers fell two short of their medal target of five at the 2012 London Olympics. Silver medallist Michael Jamieson is the only 2012 medallist competing in Leeds. Rebecca Adlington - who won two bronze medals in London - has retired.

Miley, who was beaten in the 200m medley by British team-mate Siobhan-Marie O'Connor on Thursday, also had to work hard for her win.

"I took it quite easy in the morning which meant I could go a lot faster - but I didn't expect to go that quick," said Miley.

"The fact I can go that time now unrested is a good start but it's not an exact indicator as to how fast I can go in June [at the World Championship trials]."

Joe Roebuck added the 200m butterfly title to the 100m he won on day one while Dan Fogg, who was fifth in the 2012 Olympic final, won the 1500m freestyle.

Molly Renshaw, who missed out on a place in the Olympics, won the 200m breaststroke while Rebecca Turner took the 200m freestyle.

In the multi-disability events, Paralympic champion Jessica-Jane Applegate set her second British record of the meet when she won the MC 200m freestyle.

Applegate, who swims in the S14 category, won in 2:12.47 before returning minutes later to win the 100m butterfly.

Paralympic champion Josef Craig swam close to his own world record to win the MC 400m freestyle ahead of team-mate Jonathan Fox.

The four-day event at the John Charles Centre for Sport is the first long-course international competition for the Britons since the London Games.

The squad are tuning up for this summer's World Championships in Barcelona.