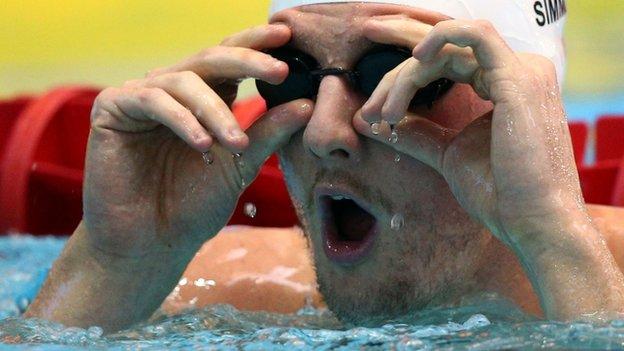 Olympic silver medallist Michael Jamieson won the 200m breaststroke to wrap up his return to competition at the Leeds international meeting.

The Scot, who took the 100m title on Friday, led throughout and won by nearly a second from British team-mate Andrew Willis and German Marco Koch.

She was beaten by Dutch Olympic gold medallist Ranomi Kromowidjojo, who won in 24.56 seconds.

Hannah Miley was also back in the water for a third day as she finished fourth in the 200m butterfly final won by Tilly Gray.

After a misjudgement in the 100m heats on Friday forced Jamieson into a swim-off, he was determined to stamp his authority on the 200m.

He went out fast in the final and touched the wall in two minutes 10.43 seconds.

"I paid for it towards the end," said Jamieson. "But at this stage of training that is what it is all about. I am just trying to test myself.

"That front-end speed is exactly what I am trying to improve on in the next couple of years and in order to do that I am going to have to keep forcing myself to be uncomfortable on the first 100m."

The 25-year-old also said he had been training to set fast times on a more consistent basis.

"I used to be very much just a swimmer's swimmer and could only peak once or twice a year," he added.

"So again that is something I have been working on, trying to improve that consistency and take little chips off my time rather than big chunks at the end of the season and it seems to be working."