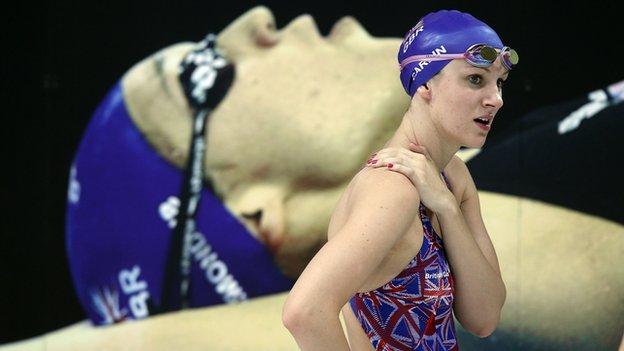 Jazz Carlin has admitted she was surprised by her success at the international meeting in Leeds.

Swindon-born Carlin secured victories in the 400m, 800m and 1500m freestyle at the inaugural four-day event.

Her return to form came after a disappointing 2012, in which illness scuppered her Olympic qualification.

"I was confident I was going to swim well but it was unexpected it was going to come in March," the 22-year-old told BBC Wiltshire.

"It was definitely what I needed. It's proved training is going really well and I've managed to pick myself up and hopefully I'm back stronger."

A Commonwealth silver and bronze medallist for Wales at Delhi in 2010, Swansea-based Carlin was suffering from glandular fever and tonsillitis during her qualification for London 2012.

She was unable to secure a place in her favoured 400m freestyle during qualifying last March, and also failed to claim an individual 200m and 4 x 200m spot during events in June.

"When you apply yourself to something and you don't get the results you want, then it's difficult," she said.

"And when you have a few disappointments one after the other you do question whether you've still got it in you.

"I had a few months away from the pool and it was hard watching the Olympics. I remember going on holiday with my family and I couldn't really enjoy it because I didn't feel like I deserved a break."

But after success in Leeds, Carlin is now feeling confident about her summer schedule, which includes the World Championship trials in June.

"I know, looking back, that I needed a break to sort my head out and get away from the pool," she continued.

"Even though it was tough and quite emotional, my friends and family have pulled me through it. I think I've been a bit of a nightmare but I'm glad I'm getting the results now.

"I hope to build on that going in to the summer."