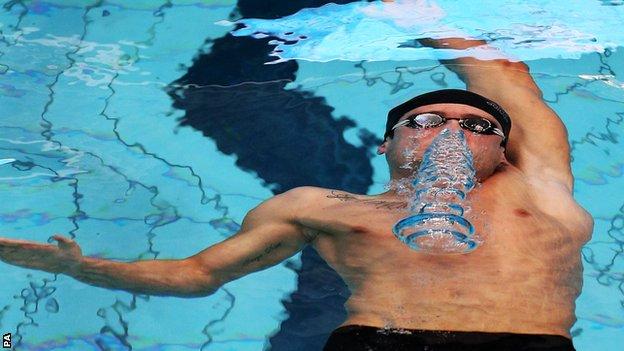 Two-time 50m backstroke world champion Liam Tancock will not defend his title in Spain after he was left out of the 27-strong British squad.

Tancock, 28, was second to Marco Loughran at the British trials, but neither man has been picked.

New head coach Bill Furniss has included only athletes considered to have medal potential at Rio 2016 - the 50m is not in the Olympic programme.

Michael Jamieson will lead the squad in Barcelona later this month.

Tancock and Loughran both achieved the World Championship qualification time but were not picked for the squad as their events are not in the Olympics in three years' time.

It was a similar story for Daniel Sliwinski and Adam Peaty (50m breaststroke), Jack Burnell (800m freestyle) and Jessica Thielmann (1500m freestyle), who all missed out on places in Barcelona.

"It is a team focused around Olympic events and current form," said Furniss, who coached Rebecca Adlington to four Olympic medals.

"This is British Swimming's new philosophy following London and the clear message that came back from UK Sport in terms of a focus on Olympic events.

"This tighter focus for the team will give us every chance to succeed at the World Championships."

British Swimming lost around £4m worth of funding and will now receive around £21.3 million over the next four years.

This comes after winning only three medals at the London 2012 Olympics, two short of their minimum target of five medals.

UK Sport revealed last week that in order for British Swimming to stay "on-track" and maintain their current level of support they needed to secure between three and five medals in Barcelona.

The bid for podium places will be led by Olympic silver medallist Jamieson and Wales' Jazz Carlin, who won three gold medals at the British Championships.

The team also features a number of swimmers who will appear at a major international for the first time. These include Ross Murdoch, who defeated Jamieson in the 100m breaststroke on Sunday, and Ben Proud, who broke Mark Foster's long-standing 50m butterfly record in Sheffield last week.

"Everyone has put last year behind them and things look really positive for the team," Jamieson told BBC Sport.

"It's a very different approach for Britain's swimmers this year with the trials coming so close to the World Championships but overall I'm pleased with the progress made."

The World Aquatics Championships will run from 19 July to 4 August, with swimming action in the pool beginning on 28 July.