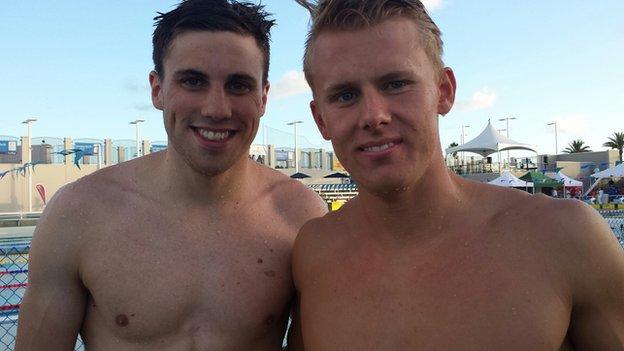 Jersey's swimmers won nine medals - including three golds - on the second day of the Island Games in Bermuda.

Jersey got their night off to the best possible start with a gold for Emily Bashforth (8:59.64) and silver for Becky Scaife in the 800m freestyle.

At the halfway stage in the swimming, Jersey's medal tally stands at 19.

That is six short of their total haul at the Isle of Wight Games in 2011.

Seventeen-year-old Bashforth described her win on Tuesday night as "quite unexpected".

"I'm really chuffed considering it was an 800 because I haven't really trained for it this season," she told BBC Radio Jersey.

"I'm so pleased that I did it and broke the nine-minute barrier as well for the first time."

"I've been to three Island Games and I've been second and third behind some really awesome athletes so to come out with a gold means so much."

Jersey picked up 25 medals in the pool at the last games in the Isle of Wight, but only three of them were gold.

So far at the 2013 event the swimmers have amassed seven gold, seven silver and five bronze medals.

The Island Games are held every two years and see up to 24 islands compete in 16 sports.