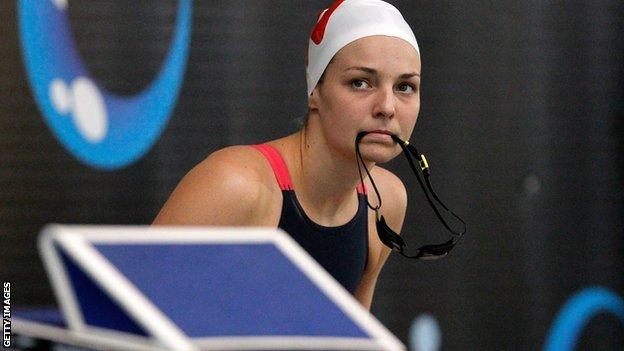 But she returned to training in February and insists she is ready to push for a medal at the Fina World Championships in Barcelona on Tuesday.

"I haven't been working out at 5am every day just to go there and have fun," Payne told BBC Sport.

She will compete in the open water event in Barcelona on Tuesday between 11:00 BST and 13:00.

"Everyone says you'll know when you want to stop and your body tells you but I didn't feel that," Payne added.

"It would be amazing [to win a medal] and an absolute dream come true and I definitely will be going there to try to get a place on the podium."

The swimmer admitted to being "disappointed but not devastated" after missing out on a medal by 0.4 seconds in the 10km open water event in London.

She had endured a difficult build-up to the Olympics, having struggled with a back injury and a kidney infection.

"I'm loving swimming and training again which is the main thing and I'll just try to take it year-by-year at the moment."

The South-Africa-born athlete moved from Stockport to Edinburgh in late 2012 to be with her new husband, former British swimmer David Carry, who found work in the Scottish capital after retiring last summer.

Payne said: "Last year [the Olympics] certainly was a challenge but I think all these things are sent to challenge us. If life was easy, it would be boring.

"What moving has done is give me that spark and I feel refreshed and I'm ready to get back in and swim."

After joining Warrender Swimming Club in Edinburgh, Payne initially suggested that her days as an open water athlete were over.

However, she made the decision to return to the event, which has brought her a Beijing Olympic silver medal in 2008, after consulting her new coach Laurel Bailey.

"I was pre-qualified [for the 10k event at the Worlds] from swimming at the [London] Olympics and we just thought that I've been doing this kind of stuff of the last 10 years, so it seemed like the best option in the time we had," added Payne.

Last month she won the Barcelona World Championship open water test event and, although there was a weakened field, Payne hopes the experience will boost her prospects.

Payne has yet to confirm her long-term swimming future and whether she will continue competing through to the 2016 Olympics in Rio or follow Rebecca Adlington's lead and retire.

She has the option of attempting to win a place at the 2014 Commonwealth Games in Glasgow, but would have to return to pool swimming as there will be no open water event.

"The Commonwealths is another home Games and it's going to be such an amazing experience. I really would love to be there but unfortunately there is no open water event.

"Perhaps I'll try to qualify for a pool event but I could look at doing more open water races around the world for a season."

Payne concluded; "I'm loving swimming and training again which is the main thing and I'll just try to take it year by year at the moment."

The Fina World Championships, which began on Saturday, run until 4 August.