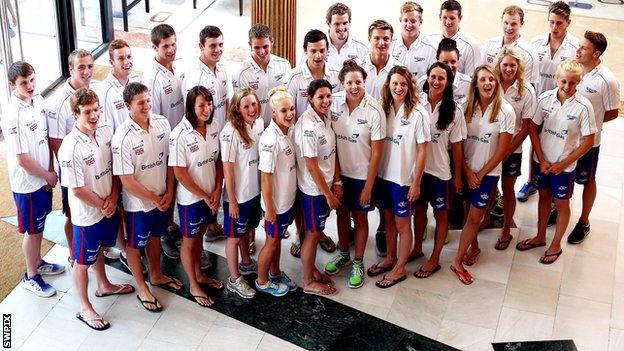 The World Championships in Barcelona mark the start of the post-Michael Phelps era, with swimming's greatest-ever Olympic performer, who won 22 medals across three Games, having retired after London.

In his place fellow US swimmers Ryan Lochte and Missy Franklin will hope to fill the void, whilst South African Chad Le Clos and China's Ye Shiwen and Sun Yang will all be expected to star over the eight-day competition.

For British Swimming the event marks something of a new beginning as well, with Rebecca Adlington - a constant source of medals since the 2008 Beijing Games - following Phelps's lead by hanging up her goggles.

Here BBC Sport picks out some of the potential highlights for each day of the swimming at the 2013 World Championships.

Great Britain are looking for the 'new Adlington' and Jazz Carlin, 22, put herself into contention for that title after she dazzled at last month's British Championships.

The Welsh swimmer missed London 2012 after suffering from glandular fever, but is returning to form and will make her bow at these Championships in the 400m on Sunday - although she is a stronger medal prospect in the 1500m and 800m events later in the week.

Her biggest international rivals in the 400m, an event no GB swimmer has ever won at the Worlds, are likely to come from French world number one Camille Muffat and Spain's double London Olympic silver medallist Mireia Belmonte.

The 200m breaststroke Olympic silver medallist Michael Jamieson will make his first appearance at the Worlds in the 100m heats and potentially semi-finals. He will be joined by newcomer Ross Murdoch, who beat his Scottish counterpart at the trials.

And 200m freestyle Commonwealth champion Robbie Renwick will hope to contest the 400m freestyle final, an event which will mark the start of double Olympic gold medallist Sun Yang's attempt to secure victories in each of the 400m, 800m and 1500m events.

The USA and Australia will be expected to challenge for both the men's and women's 4x100m relay titles, whilst Russia, France and the Netherlands could also be in contention.

London Olympic silver medallist Christian Sprenger of Australia has swum the quickest time in the world this year (59.05 secs) for the 100m breaststroke, but Great Britain's Ross Murdoch is another of the four swimmers to have dipped under one minute this season.

Jamieson, the 200m Olympic breaststroke silver medallist, will not want to finish second-best to a fellow GB athlete.

Britain's two-time Olympian Jemma Lowe competes in her second choice event, 100m butterfly, but will face a strong test with world number one Alicia Coutts of Australia and US Olympic champion Dana Vollmer both looking strong this year.

GB's Plymouth-based Ben Proud is a new name on the team for this campaign but he is not there just to make up the numbers. His time of 23.10 at the trials ranks him third in the world at present and could be an outside medal prospect.

The women's 200m individual medley will see China's Olympic champion Ye Shiwen, 17, look to defend the world title she won as a 15-year-old in Shanghai, but Hungary's Katinka Hosszu is also a contender in an event featuring GB's Sophie Allen and rising star Siobhan-Marie O'Connor.

Britain's Jazz Carlin is expected to compete in her second event of the competition - the 1500m - where her strongest opponent is likely to be US teenager Katie Ledecky, who won 800m gold last year.

Another of Adlington's old rivals, Lotte Friis of Denmark, could also be a contender.

Five-time US Olympic champion Ryan Lochte will challenge for his first individual gold of the 2013 Worlds in the 200m freestyle, but Russia's Danila Izotov is the world number one.

The 200m Commonwealth champion Robbie Renwick competes in his first-choice event, a race in which he is currently ranked sixth in the world.

There is no British interest in the women's 100m breaststroke event but Lithuania's Olympic champion Ruta Meilutyte is based in Plymouth.

The 16-year-old's season-best of one minute 5.20 seconds is just marginally ahead of Russia's Yuliya Efimova - 1.05.48 - in what could be one of the battles of the tournament.

Missy Franklin, the 100m backstroke Olympic champion Australia's Emily Seebohm and Aya Terakawa of Japan will be expected to challenge for the medals in that event, but for GB's Lauren Quigley and Georgia Davies reaching the final would be a good result.

But do not rule out the challenge of GB's Chris Walker-Hebborn, who produced a lifetime best of 53.38 seconds at the trials and could come into contention.

China's Sun Yang will continue his bid for three gold medals with victory in that 800m final, an event which could also feature GB's Daniel Fogg - in what will otherwise be a quiet day for British swimmers.

South African Chad Le Clos became an overnight star after defeating the legendary Michael Phelps at last summer's Olympics and will expect to land world gold in the 200m butterfly.

Welsh record-holder Georgia Davies could feature in the final of her favoured event - 50m backstroke, and two-time Olympian Jemma Lowe is an outside contender for a medal in the 200m butterfly.

Australia's pre-Olympic favourite for gold James Magnussen endured a torrid event last summer and it was revealed that along with several team-mates he had taken sedative Stilnox during a team-bonding session.

He is back to form in 2013 though with a season's best of 47.53 but Russian duo Vladimir Morozov and Andrey Grechin will not give him an easy ride.

Can Britain's Michael Jamieson better the Olympic silver he won in the 200m breaststroke last summer? He is currently ranked world number one in the event, ahead of London 2012 champion Daniel Gyurta of Hungary, but do not rule out the challenge of GB team-mate Andrew Willis.

Traditionally one of Ryan Lochte's favoured events, the 200m backstroke should be an interesting final as the American has taken time away from the sport since last summer's Games and Japan's Ryosuke Irie is currently ranked as world number one.

GB's Craig McNally, who trains with two-time open water world champion Keri-Anne Payne at Warrender Swimming Club in Edinburgh, could also reach the final with his time of 1.56.37 putting him seventh in the current global standings.

With Francesca Halsall opting to only contest the 50m sprint events the women's blue-riband event - 100m freestyle - will feature no British swimmers, but in their absence Cate Campbell of Australia and American Missy Franklin will be expected to contest for the major medals.

GB have not entered many of the relay events, but Britain's Robbie Renwick, Ieuan Lloyd, James Guy and Joshua Walsh could sneak their way into the 4x200m freestyle final where France, Russia, US and Australia are the main contenders for success.

GB's Jazz Carlin competes her final individual event of the World Championships and the 800m freestyle arguably offers her the greatest chance of success.

She leads the standings in Adlington's former favoured race, having swum a stunning 18 minutes 18.58 seconds in the British trials, just three seconds off Adlington's world record, but US Olympic champion Katie Ledecky is likely to be a strong challenger.

Francesca Halsall has not won a major international medal since the 2010 Commonwealth Games in Delhi after agonising near-misses at both the 2011 Worlds and 2012 Olympics, but has a chance of ending her barren-run in the 50m butterfly.

Her biggest opponent in the splash-and-dash fly final is likely to be Canadian Jeanette Ottesen.

Le Clos will return for the 100m butterfly, in which he won silver at last year's Olympics, where he will also do battle with Lochte and German world number one Steffen Deibler.

Missy Franklin will bid for another medal in the 200m backstroke event and French swimmer Florent Manaudou will look to add the world title to the 50m freestyle Olympic crown he claimed in 2012.

Hannah Miley won silver in the 400m individual medley at the 2011 Worlds in Shanghai but was fifth at the London Olympics last summer.

The Scottish Commonwealth champion has shown improved form since then though, winning world short course gold in December and her impressive time of four mintues 34.21 seconds at the trials was achieved with a broken hand.

Her greatest rival will be Olympic champion of China whilst home-favourite Mireia Belmonte and Hungary's Katinka Hosszu are other potential medal contenders.

Halsall will have another chance to end her medal drought in the 50m freestyle final, which she finished fifth in at last year's Olympics, but Campbell sisters Cate and Bronte will rival her.

Daniel Fogg will contest his favoured event - the 1500m freestyle - where Jordan Harrison is hoping to follow the proud tradition of Australian success in the event and follow the likes of Grant Hackett, Kieren Perkins and Daniel Kowalski for success.

Japan's Kosuke Hagino is the world-leader in the 400m IM this year with a time of 4:07.61, but look out for Dan Wallace - a new name on the GB squad and with plenty of potential.

Lithuania's Meilutyte will return for the 50m breaststroke on the final day of competition where she will be expected to renew her rivalry with Russian Efimova, whilst world record holder Jessica Hardy of the US is ranked third in the world over this distance.

The Australian and Japanese teams will be strong contenders in the women's 4x200m medley relay event, whilst Russia and the US are the favourites in the men's event.