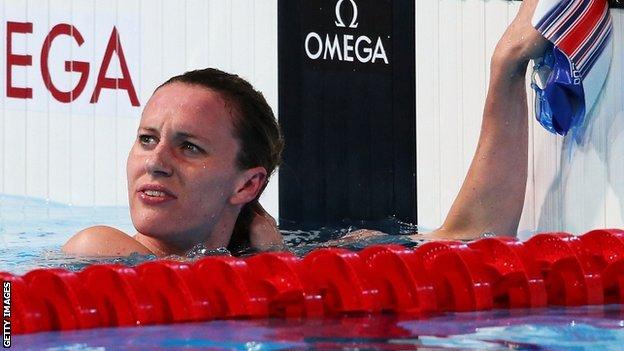 Britain's Jazz Carlin missed out on a place in the 1500m freestyle final at the World Championships after recording the ninth quickest time in the heats.

The Welsh swimmer was an agonising fourth in the 400m freestyle event on Sunday evening, and looked fatigued from her efforts on the opening day.

Her time of 16 minutes 06.46 seconds was 18 seconds short of her British record set at last month's GB trials.

"I really tried to respond when the other girls kicked on a little but there really wasn't much left after yesterday."

The Swansea-based 22-year-old missed London 2012 after struggling with glandular fever in the build-up to the British trials, but returned to form at this year's event where she claimed three gold medals.

It raised the prospect that Carlin could challenge for multiple honours in Barcelona, and she admitted it had been hard to get over missing out on a medal in the 400m.

"It's difficult to recover [between events]," she said. "Sleep is key and I did really struggle with that last night and I was perhaps over-thinking about just missing out on bronze.

"The 400m is a bonus event and I did want to swim it here, and even though it may have affected me today [in the 1500m] I still swam a best time yesterday and have to be pleased with that."

Carlin will now focus on the 800m, which begins on Friday morning. She is ranked number one in the world this year after recording the leading time of 8:18.58 at the British trials in June.

Welsh 100m backstroke record holder Georgia Davies was another surprise casualty on the second day of competition in Barcelona.

The 22-year-old touched in 1:01.61, just three tenths short of what she needed for a place in Monday evening's semi-finals.

Wales's Ieuan Lloyd, 20, missed out in the 200m freestyle heats, an event from which Scottish team-mate Robbie Renwick, 25, qualified quickest.

England's Sophie Allen, 21, failed to progress to the 100m breaststroke semi-finals but it is not her strongest event, and she will return for the 200m individual medley final later on Monday.