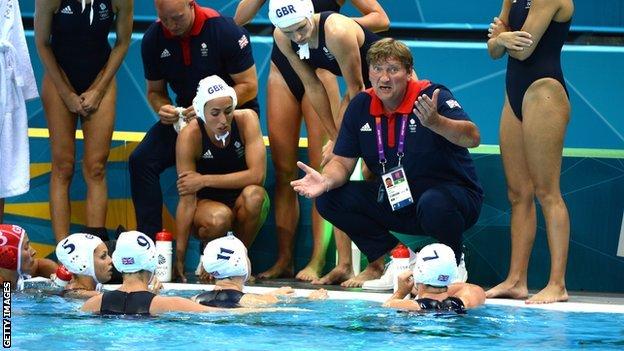 After losing £4.5m in funding from UK Sport, British water polo is fighting to keep its head above water.

Of all the sports to be subject to a funding cut since London 2012, only basketball has suffered a bigger reduction.

UK Sport chief executive Liz Nicholls cited water polo's slender chances of winning a medal by 2020 as one reason for the sport's funding being cut, having not featured on the podium since 100 years previous.

Naturally, there are now fears that such a drop in funding for the national teams will have a ripple effect across the whole sport.

However, key figures from both the new men's and women's national club champions believe the sport can still have a bright future.

Coach James Ross, whose Cheltenham side won the British Championships last weekend, told BBC Sport: "I think there is hope for the sport.

"The standard of our club-level game is improving, which gives you the opportunity to pull through more quality players.

"We have seen a real increase in participation at our after-schools club in Cheltenham and I think, across the board, the participation levels have increased with the extra focus on the sport during the Olympics."

After a tense victory on penalties against Manchester in last weekend's final, Ross's team have qualified for water polo's premier European club competition, where they will face more illustrious opponents, including the 2013 winners VK Crvena Zvezda - a fully professional Serbian outfit.

"We're excited and, at the same time, there's a lot of work to do now," the coach said.

"Obviously, being an amateur sport, it's now a question of making sure we can get some funds together and do some fundraising.

"We'll try and get some more sponsors on board to ensure that we're able to take the best team, rather than just those players who can simply afford what will be quite an expensive campaign in Europe."

"Manchester had won for the past six years, and Sheffield before that, so I think it was our turn.

"I'm really excited about playing in Europe. Liverpool have always been lucky enough to be able to afford it and I can't see that changing in the future."

But Britain's top club sides will be hoping to fare much better than the national side's recent results against European opposition.

Team GB's women lost all three of their group-stage matches at London 2012 before being narrowly beaten by Spain in the quarter-finals, while the men's team lost five consecutive matches at the Games and exited at the group stage.

Despite their recent struggles, Great Britain's men actually have a proud history in men's Olympic water polo, having been crowned champions at four of the first five modern Olympic games - the last of those gold medals coming in 1920.

That said, the team's appearance at London 2012 was their first at an Olympic Games since 1956 and Britain's women have yet to win a medal since women's water polo was finally added to the Olympic programme for Sydney 2000.

But will Britain ever compete in Olympic water polo again?

"I don't think there's any chance of the men competing in Brazil," Ross admitted.

"There is a slim chance the women may be able to get there and certainly if their funding is reinstated then I think there's a very strong chance that they'll get there.

"It takes eight or nine years for players to get from the junior ranks to playing for national league teams.

"For the London Games, they were developing a very young women's squad, who would only have improved for the next Olympics."

Water polo is not the only aquatic sport coming to terms with funds drying up, however, with several areas of British swimming hit by a wave of cash cuts.

"It's very disappointing," Ross added. "I think we may be in danger as a country of losing focus on team sports and concentrating purely on individual sports."

And, although swimming will still receive more than £20m in funding for the next two Olympics, losing £600,000 has hit the sport hard at a time when a number of swimming pools across the country are being shut.

Across the country, residents are fighting plans to close community baths.

A century ago, Britain was building swimming pools to be proud of. Now, council cuts mean many pools face an uncertain future.

British Swimming's funding was, indeed, cut by £4m. But it is not just at the elite level swimming has suffered.

Since 2008, grassroots participation has fallen from 3.2 million to 2.9 million a week, while the Amateur Swimming Association says 51% of children aged seven to 11 cannot swim 25m.

Rebecca Adlington: Why are we closing our swimming pools?

British Swimming is appealing against the decision to remove all the Olympic funding for water polo and synchronised swimming having submitted representations to UK Sport last week.

An e-petition has also been set up in an attempt to save water polo and Kathryn Fowler, who played for Team GB at London 2012, told BBC Sport: "All my energy is going into the campaign to save women's water polo.

"At the moment, there just aren't enough hours in the day to fight all the battles that aquatics are facing."

Drabble added: "It is a big shame but British Water Polo are fighting with everything they've got to regain the amazing support that [funding] provides, looking at every avenue."

So where can water polo go from here?

"The whole of the water polo community have shown their passion for the sport and everyone is really coming together to help make the future of the sport a thriving prospect," Drabble continued.

"In the next few months we have world league matches in Russia and then Spain are coming over to Great Britain, so we're looking to win and show the world of sport that British water polo are worth saving."

Success in those upcoming games could well be key in the search for a fresh wave of sponsorship.