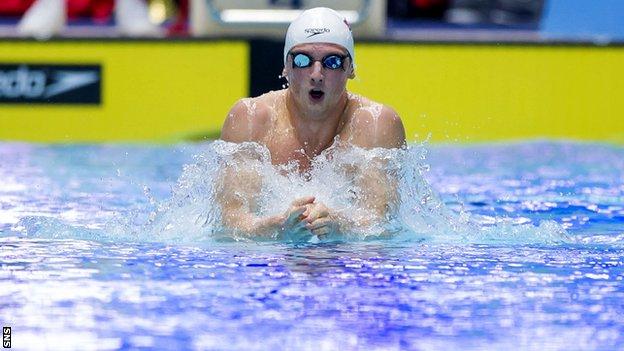 The 25-year-old, who is bidding to take part in the Commonwealth Games in the city later this year, posted a time of 2:08.01 in the 200m breaststroke.

Ross Murdoch, who was second, also produced a qualifying time.

Reflecting on his win, Olympic silver medallist Jamieson told BBC Scotland: "It's job done. That's me on the team, thankfully.

"Being an ambassador for the Games it would have been a hell of a story if I hadn't made the team, so it's good to get that out the way.

Being an ambassador for the Games it would have been a hell of a story if I hadn't made the team, so it's good to get that out the way

"It wasn't a great swim tonight. I think the heat this morning was a much better swim technically than tonight.

"I struggled to settle down this afternoon, just the excitement of being back racing again, and I probably went a bit too hard this morning and that has taken the shine off my legs tonight.

"I'm a little bit annoyed because I'm definitely in better shape than that but it's my first race in a little while so hopefully I can build into the competition and again next week at the British Gas championships as well."

Johnstone said Corrie had pushed her "all the way" and added: "I can see her out the corner of my eye. Of course, I'm always pleased to touch the wall first but I'm so happy she's made the [qualifying] time too."

He said: "After the disappointment yesterday in my 100m, I really learned some lessons from that race and today I was a lot more relaxed going into it. The race felt so much better.

"As you can see in my face, it's such a relief to get that qualifying time and be selected for your country this summer.

"It's going to be a really strong Scottish team this summer.

"The 200m is coming up on Sunday so I'm looking forward to that. In the 100m yesterday I was really tense in the whole race and I didn't do me much good.

"Come this summer this place is going to be an absolute riot so it's fantastic getting in this facility."