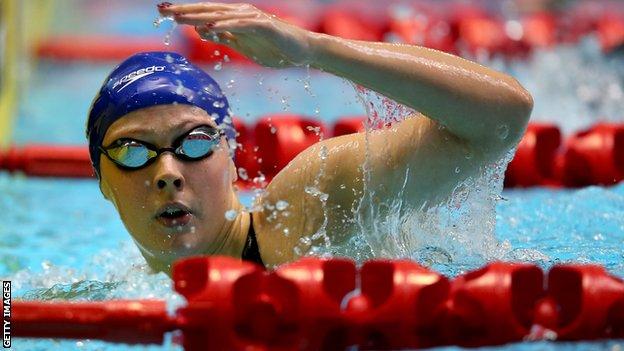 England's Siobhan-Marie O'Connor won her second gold at the 2014 British Championships with an English record in the 200m individual medley final.

"I think I can still go quicker," said O'Connor, who was Team GB's youngest swimmer at London 2012 Olympics.

"I'm really happy to win and get the record, but I went out too quickly and was really struggling in the final few metres. Once I get that sorted I'll be in a good place."

I'm really happy to win and get the record

The British Championships at Tollcross, Glasgow are doubling up as the final opportunity for swimmers to secure Commonwealth Games berths for England, Scotland and Wales.

Six-time Paralympic medallist Claire Cashmore won her SB9 100m breastroke race, but her time of one minute 22.31 was just outside of the required mark.

Halsall, who is the defending Commonwealth champion over 50m butterfly, continued her impressive meet with a second gold and a fastest qualification time for Monday's 100m freestyle final.

"I'm feeling really good at the moment and am pleased with both the times I'm doing and the way I'm swimming," said the English swimmer, who turned 24 on Saturday,

He finished the 50m backstroke event in a personal best of 25.09 secs, with world record holder Tancock second in 25.38.

"I'm enjoying this battle with Liam and it's great to come out on top again. Hopefully I can keep lowering my times closer to the records he's set," Walker-Hebborn said.

Tancock added; "I've had injury problems and they took a while to get diagnosed and fixed but I'm not making excuses, I've had a dip but can come back strong again."

US-based Brown, 25, won the men's blue-ribbon 100m freestyle final for the second year in a row. His time of 49.35 secs was outside the English Commonwealth qualification mark, but he could yet earn a spot in the individual event after securing a place in the relay.

Sophie Taylor, 18, who has already won the 50m and 200m breaststroke titles, continued her impressive form by qualifying quickest for Monday's 100m final.

Scotland's 100m breaststroke champion Ross Murdoch achieved the same feat in the 50m, whilst compatriot Andrew McGovern secured his place in Glasgow by finishing fifth in 25.91 secs in the 50m backstroke event.