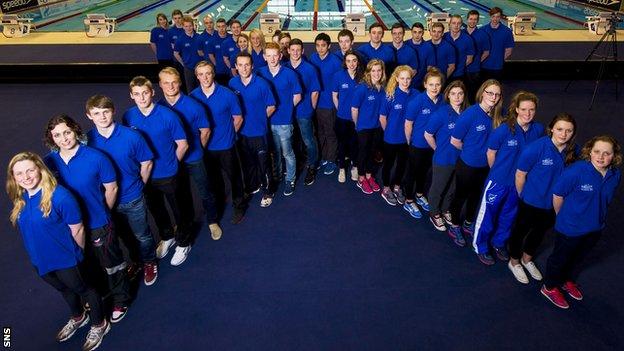 Of the 38 swimmers and two divers selected, 28 make their Games debuts.

Among them is 16-year-old diver James Heatly, whose grandfather Sir Peter Heatly won three Commonwealth gold medals, a silver and a bronze.

"There is a strong core of experience and success and I'm excited to see so many new faces," said Team Scotland chef de mission Jon Doig.

"At this stage, it is the biggest single sport in Team Scotland for 2014."

Scotland have claimed more medals in the pool than in any other sport in the Commonwealth Games, a total of 73, including 20 golds.

And five of the athletes to make the team for 2014 have stood on the Games podium previously, adding eight medals to Scotland's tally.

Hannah Miley will defend her 400m individual medley title on the opening night of action at Tollcross International Swimming Centre on 24 July.

Scotland is statistically the strongest nation in the world in the men's 100m breaststroke right now, with Ross Murdoch having demonstrated his pedigree by winning the event at the recent Scottish and British championships to go top of the world long-course rankings.

Murdoch set a new Scottish record in the 100m and swam the fastest time in the world this year in the 50m, 27.28, in winning the 50m breaststroke at the Scottish Championships.

Olympic and Commonwealth silver medallist Michael Jamieson will compete in the 100m and 200m breaststroke in Glasgow, having won the 200m title at the Scottish and British Championships in Tollcross.