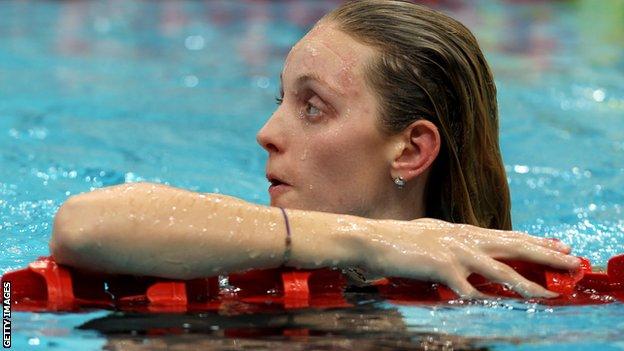 Commonwealth champions Liam Tancock and Fran Halsall have been named in England's 39-strong swimming team for this year's Games in Glasgow.

England won seven gold medals in Delhi four years ago and while Tancock and Halsall will defend their titles, double gold medallists Rebecca Adlington and James Goddard have retired.

Halsall, who won five medals in Delhi, said: "I'll be looking to improve."

The Glasgow Games begin on 23 July with swimming events commencing on 24 July.

Experienced swimmers such as Halsall - 50m butterfly gold medalist - and Tancock - 50m backstroke and 100m backstroke winner - will be joined by a large number of Commonwealth debutants in the squad.

London Paralympic SM8 200m individual medley champion Ollie Hynd will be one of three swimmers representing England in the Para-swimming events, which also count towards the overall medal total, along with Steph Slater and Tom Hamer.

Halsall, who represented Great Britain in the 2008 and 2012 Olympics, added: "It's going to be another good marker two years out from the next Olympics. It will show where we are, how we're doing and how you deal with a multi-sport games environment."

Dawn Peart, the team leader for England's swimmers in Glasgow, believes the team of 2014 is ideally prepared to meet the challenge of facing some of the world's best swimming teams.

"Competition in Glasgow promises to be very strong with representations from Scotland and Wales together with major challengers from Australia, Canada and South Africa," said Peart.

"It is a performance-focused team that has been selected with realistic opportunities for success. while for some of the younger swimmers it will be an opportunity for them to make their first mark at international level."

Team England's swimmers won 34 medals in total at the Delhi games four years ago, adding 16 silver and 11 bronze to their seven gold medals.