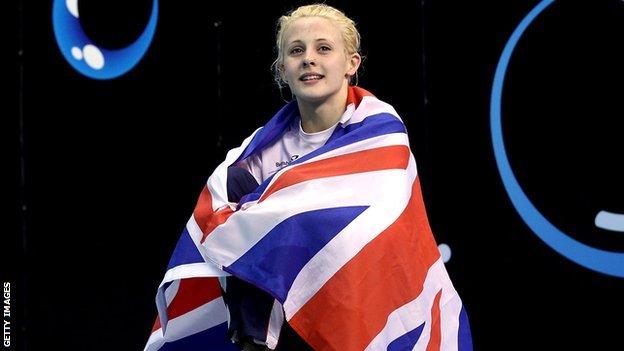 England's Siobhan-Marie O'Connor won two gold medals on the opening day of finals at the British International Meet in Manchester.

The championships represent the final chance for home nation swimmers to race competitively before the Commonwealth Games in Glasgow starting next month.

British Swimming has taken the unusual step of switching finals from the evening to the morning session.

The idea is to test the ability of their elite athletes to reach peak performance in the morning - something they struggled with at the London Olympics.

"It is a bit of a shock," said O'Connor, who broke the English 200m individual medley record in Barcelona earlier this month.

"Sometimes I find it a bit tough to get going in the morning, but it's a great sign for the Commonwealths, where I'll be looking for a medal for the first time at a major event."

British 50m backstroke record holder Georgia Davies, who won bronze for Wales at the 2010 Commonwealth Games in Delhi, eased to victory in the same discipline in Manchester.

"I have been working on my 100m mostly but the 50m will always be the one that feels more natural and I've managed to keep my speed," she told BBC Sport.

Peaty, 19, set new British records for the 50m and 100m breastroke distances in Mare Nostrum events this month and will race Scottish rivals Michael Jamieson and Ross Murdoch at Glasgow 2014.

"Reaching the world championships was a breakthrough last year and I've built on that and can't wait for the Games," he said.

Slater, 23, who was a promising able-bodied swimmer before nerve damage in 2010 ended her dreams of competing in Delhi, will compete in one of the disability swimming events in Glasgow.

Victory in the 100m multi-classification event in Manchester came after she was recently diagnosed with dystonia, which leads to muscle spasms and fatigue.

"I've not been able to train as much as usual but I'm dropping a few of my events and I'm managing it," she said.

The event, which started on Tuesday, runs until Saturday.