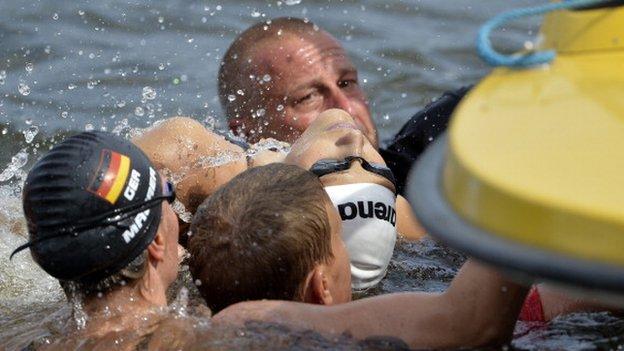 Polish swimmer Natalia Charlos had to be rescued from the water after losing consciousness in the women's 10k race at the European Swimming Championships.

Charlos, who lives and trains in Germany, was pulled ashore on the opening day in Berlin after officials and spectators alerted the lifeguard.

The 21-year-old was treated at the scene and Germany team doctor Alexander Beck said she was recovering well.

The 26-year-old, who is based in Loughborough, was racing over the distance in the time trial format for the first time and won in a time of 53 minutes 41.4 seconds.

He finished 20.4 seconds ahead of Germany's Rob Muffels, with another German Thomas Lurz taking bronze (54:02.6).

"It was a bit weird not knowing where you are until the end, but I swam my own race and tried to time it so I was faster at the end," said Fogg.

"I knew I had a good chance if I swam well and starting near the end probably helped, but as I had never done it before I didn't know how it would go so I am really pleased with the gold."