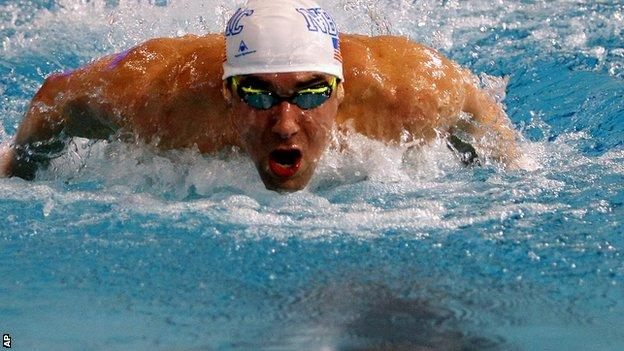 Michael Phelps is to return to competition after his six-month competitive ban for drink-driving ends.

Phelps, 29, was stopped by police after being caught travelling at 84mph (135km/h) in a 45mph zone in Baltimore, Maryland, last September.

The most decorated Olympian in history will compete in Mesa, Arizona from 15 to 18 April.

He tweeted: "My suspension is finally up! Time to get back in the pool and race again! Looking forward to #mesa!!"

Phelps had previously been charged with driving under the influence in Maryland in 2004. Following the latest incident, he pleaded guilty to driving while impaired in exchange for 18 months' probation as well as receiving a one-year suspended prison term.

The 18-time Olympic gold medallist had also been banned from taking part in this summer's World Championships in Russia.

But in March, USA Swimming director Chuck Wielgus told ESPN that there may be a "pathway" for Phelps to take part.

Having initially retired after the 2012 Olympics, Phelps changed his mind and had been preparing for the 2016 Games in the Brazilian city of Rio de Janeiro.