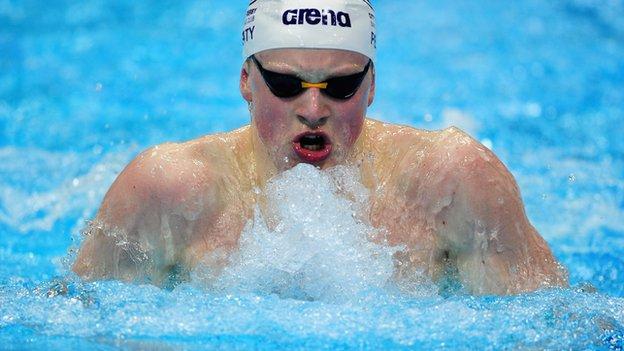 Adam Peaty set a stunning 100m breaststroke world record on the penultimate night of the British Swimming Championships in London.

He finished in 57.92 seconds, beating the previous mark of 58.46 set by South Africa's Cameron van der Burgh at the London 2012 Olympics.

"I kind of surprised myself," Peaty told BBC Radio 5 live.

"I was going to wait until Kazan [World Championships] to produce that time and I can't really believe it.

"I just dived in hoping for a 58 really and I have to say a big thank you to my family for supporting me."

Murdoch's time is a new Scottish record and automatically qualifies the 21-year-old for the World Championships later this year.

Francesca Halsall, who was a surprise second in the 100m freestyle earlier in the week, claimed a comfortable victory in the 50m event.

"To win 10 titles and be the best in Britain is fantastic," Halsall told BBC Sport.

"My preparation hasn't been great [due to a shoulder injury] but I'm quicker than I was at this time last year, so that's really good."

However, his time of four minutes 12.78 secs was not quick enough to guarantee him a place in the World Championship team.

"I'm not where I or British Swimming would like me to be in terms of time at the moment," said Wallace.

"However, I usually get stronger as the season goes on, so hopefully the selectors will see that."

Sophie Taylor - the Commonwealth 100m breaststroke champion - won the British title in the same event for the second year running.

However, despite touching ahead of Sarah Vasey and Molly Renshaw, she finished in tears after missing out on the time to guarantee her place at the Worlds.

The British Championship is the first elite swimming event to be held at the London Aquatics Centre since the 2012 Olympics.