He is not just part of the pride; he is the leader. He does not defend titles; he attacks them.

That is the philosophy - Peaty's driving force - and now he has a giant tattoo of a lion on his left bicep to indelibly demonstrate it.

You can forgive the self-confidence as Peaty is a very special talent.

In a two-year spell from 2014 to 2016 he won 100m breaststroke gold at every major swimming event, culminating in a remarkable world record of 57.13 seconds at the Rio Olympics.

Such was the scale of the achievement, swimming's greatest of all time, Michael Phelps, admitted he would be no match for the British lion.

"It's one of the grossest swims I've ever seen," said the 23-time Olympic champion. "I'm just glad I don't have to race him!"

Peaty says it is "humbling" to hear such comments, but the 22-year-old wants more.

More has a name - 'Project 56' - and a clear goal: being the first swimmer to break the 57-second mark in his event.

"I've achieved my lifetime dream, but I want more. I'm not happy with just Olympic gold," he tells BBC Sport.

"I want to leave a legacy and leave a world record that no-one will ever get."

Peaty opened the doors to show the inner workings of Project 56, giving BBC Sport wide-ranging access to his training camps in Thailand and Tokyo. This is his story.

Such has been Peaty's dominance since a breakthrough title for England at the 2014 Commonwealth Games, he was billed as a near guaranteed gold medal for Team GB at Rio 2016.

Preparation is key and most athletes have regimented pre-competition rituals and routines, so having some of his kit stolen at the beginning of his time in Rio, then missing two buses from the athletes' village to the Olympic venue just hours before the final, could have been disastrous.

But not for Peaty, who had been prepared for this moment since he was 14 by Mel Marshall, the three-time Olympian who coaches him.

"Some people could have freaked out, but Mel had prepared me for anything," says Peaty.

"You're nervous before every race and before the final I was aware of the tens of thousands of people in the arena and millions watching around the world - but I was calm.

"I always remember what Mike Tyson once said when he was boxing: 'I'm nervous, I'm nervous, but every step and inch I get closer to that ring I'm ready and no-one can beat me.'"

Marshall had developed this attitude meticulously since she and Peaty paired up in 2009.

"I had just come out of elite sport when we met and he was like a sponge soaking up all of the information I had to give him," she says.

"We had to cement his character, though, and prepare him for anything, so for three or four years before the Games I was taking him out of his comfort zone."

That would include a trip to Zambia - a country Marshall visits frequently to raise funds for charities.

"I'd been in an Olympic arena myself so I knew what he would need and things like making him eat without a fork, or having dinner arrive a few hours late was all about preparing him to adapt," she says.

On 8 August 2016 in Rio, Marshall would discover whether all her planning and preparation had been enough.

"It was like I had 57 seconds for a promotion to a job that I wanted for the rest of my life," Peaty says with a smile.

"I knew I was ahead at 50m, but I never like to think 'I'm winning' because for me that's your body giving in. I like to think someone's catching me."

No-one was. Peaty won the race by an astonishing 1.56 seconds from defending champion Cameron van der Burgh of South Africa.

"It was definitely a relief, though, after all of the years of early mornings, late finishes and the people who had put so much effort into helping me get there."

Life since the Games

While Peaty attained public recognition for his world, European and Commonwealth successes prior to Rio 2016, Olympic gold catapulted his profile to that of celebrity status in the UK.

For Peaty, who maintains he is still just "a lad from Uttoxeter", this was a massive change - with positives and negatives.

"The bad side is the lack of control. Sometimes you just want to sit down and be with your family but people stop you and want photos," he says.

"Managing my time is hard, because you have to try and control everything and then do all the training that I was doing before all of this started.

"Don't get me wrong - it's more positive than negative. I love the life I lead and wouldn't change it for anything."

The man with the lion tattoo

Another major change is to Peaty's body, specifically his left arm, which sports two tattoos.

The Olympic rings are a standard addition for nearly all Olympians, but the British lion - which runs from shoulder to elbow - is a little less common.

"It's a British lion because I'm very patriotic and the lion has characteristics I can relate to - like being proud and strong," he says.

"It reminds me what it took to get that gold and the world record."

Peaty also has the word 'equilibrium' beneath the Olympic rings.

"I wouldn't say I'm spiritual, but you need a lot of balance in life otherwise your life goes completely upside down," he says. "The key for me is keeping things relaxed."

That is in part why he was unfazed about modelling in only his trunks, in a variety of poses, for magazine Attitude.

Another media stunt for sponsor Arena saw him walk around Trafalgar Square during the middle of the day in just his swimwear. 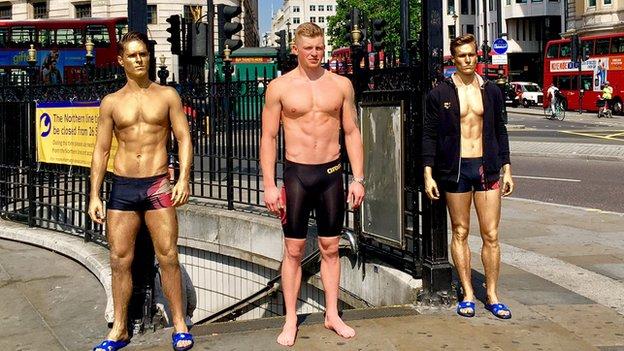 "I like to keep things a bit fun," he laughs.

It is this combination of being relaxed outside of the pool but supremely focused in it which has impressed those around the Great Britain squad.

"He is a shining example of the attitude and behaviours that we want," says British Swimming head coach Bill Furniss.

"We had it before with Becky Adlington and now there's Adam Peaty that everyone who trains around him sees the dedication and just what it takes to win."

With multiple Olympians like Francesca Halsall and Robbie Renwick retiring after Rio 2016, Peaty is enjoying his new status in the team.

"When you go to the Olympics and win, people start to look at you more and I want to pass on the motivation I have to others so they push on more too.

"I've only been part of the GB team for three years, but it's never been this strong. There's so much cohesion and support for one another."

'He needs to hunt'

What does the man who has won every major swimming title by the age of 21 do next? Quit at the top or carry on in the hope he can maintain that success?

For Peaty, there was no question that he was going to fight on, but with no obvious rivals or up-and-coming challengers to provide motivation, he needed a new challenge.

"I'd achieved everything I ever wanted to and there was a moment when I was getting back into training after the Olympics and thinking, 'well, what now?'" says Peaty.

He admits to having "disagreements" with Marshall during this time, but his coach knew exactly what to do.

"He's a lion. You have to put the meat out in front of him so he can hunt," she says.

"Of course you drop in a 56 as soon as he's gone 57 seconds - you plant the seeds and then he thinks he came up with the idea.

"To be honest, I don't think we've seen the best of him yet. Adam still has more to give."

That is an ominous sign for any breaststroke swimmers hoping to hunt down the reigning Olympic, world, European and Commonwealth champion.

"I know it's possible," says Peaty. "I literally just have to go 0.14 seconds quicker.

"It's such a great motivator, though, and it means I'm pushing harder than ever, sweating more, bleeding more and often in tears of pain.

"He is probably the hardest-working athlete I have ever worked with," he tells BBC Sport.

"If I told him to run through a brick wall, he'd probably do it then get up and go again, he's an incredible specimen."

Weights are amongst Peaty's favourite workouts, whilst he has his own 'jump clap' and 'chin-up clap' routines, which emphasise his colossal upper-body strength and have gone viral on social media in recent months.

"Swimming 10,000m a day following a black line can make it hard to keep motivated," says Peaty, who can bench-press 132kg.

"I love the gym. It just adds another element to training and I'm hitting it harder than ever to get stronger and hopefully faster."

'Project 56' could be achieved in the coming few days at the World Aquatics Championships in Hungary, where he will race in the 100m breaststroke on Sunday before one would assume he returns for the final on Monday.

"It could happen, but I think realistically it'll be more like in the next 18 months or at the next World Championships, if not Tokyo," says Peaty, who will also race in the 50m breaststroke and two relay competitions in Budapest.

His preparations for the 2020 Olympic Games are well under way, having joined the rest of the British team on a training camp in Tokyo in June.

"I learnt that breakfast is pretty small so I've been getting plates and plates of that," says Peaty, who consumes more than 5,500 calories per day.

"It was great to see the city - busy but very calm - and it gives you a sense of what it will be like in a few years.

"Rio will always be special as it was my first Olympics, but Tokyo will be even better.

"Being here has reminded me of what Mel and I are trying to do - win everything year on year, be dominant and leave a good legacy for the kids back home.

"I want to push on the boundaries and be written down in the record books forever."