Britain's Adam Peaty broke the 50m breaststroke world record for the second time in a day as he reached the World Aquatics Championships final.

The defending champion, 22, won the semi-final in 25.95 seconds, becoming the first person to break 26 seconds and eclipsing his 26.10 in the heats.

"I honestly can't believe it. I can't even think. I just went out there and did what I do," he told BBC Sport.

He added: "The hard work has gone on in the gym. I am looking for areas of where I can improve and hopefully get down to mid-25."

A magical day for Peaty 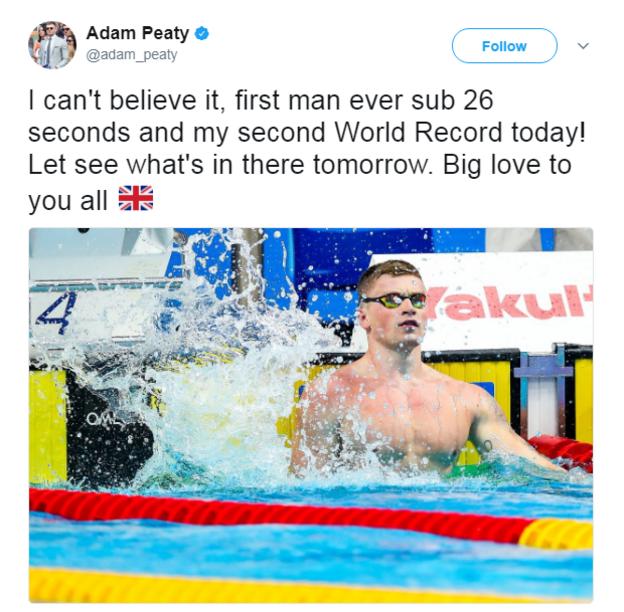 He returned to the pool to break the 50m world record of 26.42 he set at the 2015 World Championships in Russia.

"I thought I was going to go slower in the semi-final because I was a little bit less energetic," Peaty said.

"I was on such a massive high from this morning and it was so hard to ignore the fact that I did a world record and try to get myself emotionally ready."

If Peaty wins Wednesday's final - scheduled for 17:17 BST - he will replicate his achievements at the World Championships two years ago when he took the 50m and 100m titles.

'This kid is unbelievable' - analysis

This kid is absolutely unbelievable. Does he know any boundaries whatsoever? I don't think he does.

He's almost taken a second off everyone else over a 50m dash. It's not about gold medals for him any more - it's about how much he can move the sport on.

He shocked himself. It is the first time in a long time that I have seen him genuinely shocked.

His start was better than this morning but he still has room to improve that, which is insane.

Which other Britons were in action?

Kathleen Dawson was eighth in the women's 100m backstroke final in 59.90. Canada's Kylie Masse took gold in a world record 58.10.