"I'm feeling very good. I'm so, so happy with my displays," Peaty said.

He was speaking to the BBC after taking part in the 4x100m mixed medley relay final, in which defending champions Britain finished fifth. USA won in a world record time of three minutes 38.56 seconds. Australia took silver, with China and Canada in joint third.

It was a different story in his individual race, earlier. Peaty was level with his rivals in the first few strokes before he pulled away after 30 metres. The City of Derby swimmer appeared set to break the world record for a third time in two days, but narrowly fell short.

The Briton suggested "equilibrium" was key to his successes.

"I'm a massive believer that all areas of your life need to be equal for you to perform at your best," he added. "Lifestyle, family and friendships. If one is out then you are not going to be at that level."

"I think I have to retire and give it a few years and come back when he's older," joked the 29-year-old.

"It's really impressive. It's not even breaststroke anymore, he's swimming like a new kind of stroke, like a metamorphosis between [butter]fly and breast.

"There not enough words to describe how good he is," he said.

"Under 26 seconds for the second time - only four hundredths of a second off his best time. It was, again, an immense swim."

What makes Peaty so fast over 50m? 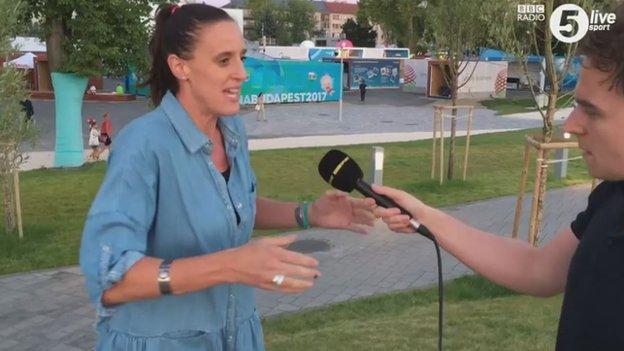 We all know how strong Peaty is.

You couldn't do that in the 100m because of the build-up of lactic acid. But because it's Adam Peaty, he might be able to manage that in a year.

He is the poster boy for swimming across the world, not just in Britain

Adam gets the biggest cheer from the crowd for a non-Hungarian for the whole meet.

Everyone wants to see him do well because he's such a likeable character.

No-one is even close to him, so you ask yourself how much more can he improve.

"I've not done a PB in this since the Glasgow Commonwealths in 2014," she told BBC Sport. "The depth here is incredible. You can't leave anything behind."

Brazil's Etien Medeiros was the fastest qualifier, winning the second semi-final in 27.18.

Duncan Scott reached the 100m freestyle final after finishing third in his semi-final in a time of 48.10 seconds.

The 20-year-old finished behind winner Frenchman Mehdy Metella, who touched home in 47.65. United States swimmer Caleb Dressel won the other semi-final in 47.66.

Team-mate Max Litchfield reached the 200 individual medley (IM) final after finishing second in his semi-final in a time of 1:56.70. He is third fastest overall, with Japan's Kosuke Hagino, who won 400m IM gold in Rio, leading the pack after recording 1:56.04.

"We're always in the mix - it'll be a tough race," Litchfield told BBC Sport. "It'll be nice to get a little bit of revenge after finishing fourth in the 400m IM at Rio 2016."

South Africa's Chad le Clos stormed to victory in the 200m butterfly final in one minute 53.33 seconds. Home favourite Laszlo Cseh closed the gap to the London 2012 champion in the final few metres, but had to settle for silver.

Le Clos was in tears during the medal ceremony. His father Bert, who became a celebrity because of his interviews during London 2012, and mother Geraldine were present in the Budapest arena. The pair had been receiving treatment for cancer.

"Last year, my family's health is more important than gold medals," said the 25-year-old swimmer, who finished fourth in the event at Rio 2016.

The biggest shock of the evening came in the 200m freestyle final where United States' Katie Ledecky lost for the first time in 13 finals when she was beaten to gold by Italy's Federica Pellegrini.