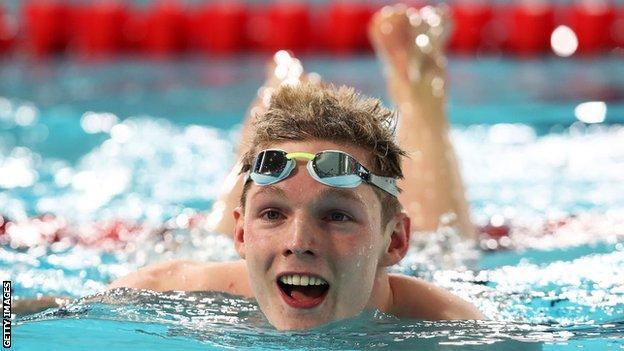 Duncan Scott is targeting a World Championships medal this summer after breaking his own British 100m freestyle record in Glasgow.

The 21-year-old Scot won the British title in 47.87 seconds, with University of Stirling team-mate Scott McLay, 19, second with a personal best of 49.05.

"This is becoming quite a good pool for me," said Scott, who won European 200m freestyle gold at Tollcross last year.

"Now it's about trying to do that on the international scene consistently."

Scott, who won six medals at last year's Commonwealth Games, said qualifying for the Worlds in Gwangju, South Korea, was "a weight off my shoulders".

He also has selection chances in the 200m individual medley on Saturday and the 200m freestyle on Sunday.

"It was good to break 48 seconds flat again; that's the second time I've done that so I'm happy with that," added Scott. "You know 47-mid-to-low could medal, so there are more areas to look to improve on but that's a step in the right direction.

"That time is not going to medal at a world championships so there are definitely a couple more steps that need to be taken."

Welsh Commonwealth silver medallist Daniel Jervis dominated the 1500m freestyle to secure a place in Gwangju, as did Max Litchfield, who led from start to finish in the 400m individual medley.