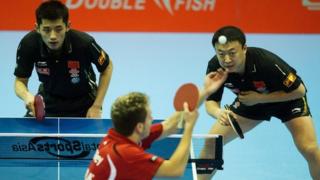 The world's leading table tennis players had the chance to sample next year's Olympic venue as the ITTF Pro Tour Finals arrived at London's ExCel Centre.

As expected the Chinese reigned supreme, winning all four senior competitions, but Great Britain's number one Andrew Baggaley insists they can be beaten.

BBC Sport's Nick Hope caught up with Baggaley and team-mate Liam Pitchford at the event, part of the London Prepares Series which tests venues ahead of the 2012 Olympic and Paralympic Games.