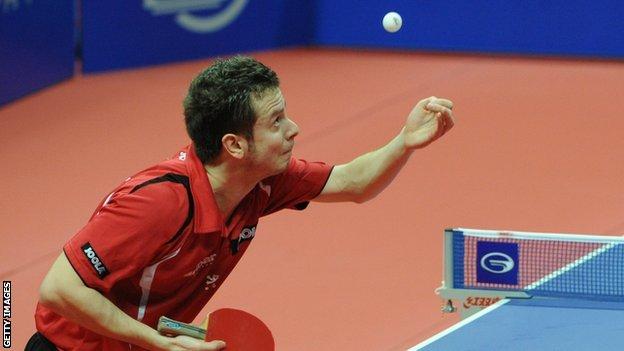 First the oche. Then the baize. And now the paddle.

Barry Hearn's penchant for spicing up sports has taken him through darts and snooker and now on to the unlikely destination of table tennis.

Just days after the conclusion of the PDC World Darts Championships, when the tungsten has stopped flying and the plastic beer cups have been swept away, Alexandra Palace will host the World Championship of Ping Pong.

Sixty-four of the world's best ping pong players will attempt to earn their share of a $100,000 (£61,000) prize fund amid the dazzle of flashing lights and thumping music in front of a potential global TV audience of 700 million - a far cry from the action played out around the tables at this summer's Olympics.

Ping Pong World Championship - What is it?

"I'm going to make them all superstars," Hearn explained to BBC East Sport in trademark overstated fashion. "It's rock 'n' roll. It's going to be high fives, knocking balls into the crowd, interaction between the players and the crowd.

"I get one chance at this to impress the paying public. The purists have been crying out for this. Now they've got their chance."

By purists, Hearn is referring to the keepers of the old style 'ping pong' game, which uses hardbats with a sandpaper-like surface, creating less spin and speed and therefore a slower, easier to watch sport.

Will it work as a TV spectacle? Hearn, the man behind sport promoters Matchroom Sport, believes so. And he is in a position to make the call, having brought consistent television audiences to darts, snooker and even fishing.

"I don't really know what I'm going to get, frankly," he said.

"But I think, and hope, I'm going to get an atmospheric sport, a la darts - getting everybody involved and making sure the crowd have a good time - and seeing if we can go back 30 years.

"Twenty-five years ago there were 18,000 people at Madison Square Garden watching the Ping Pong US Open. This year, the winner of the US Open gets about $2,000, so you ask the question 'what went wrong?'

"A lot of it is down to the introduction of the sponge bat with the pimples on, which has made it a spin-orientated game.

"The rally times are far shorter than they used to be when the ball was coming off a lot slower from a sandpaper bat.

"It was athletic, aerobic and televisual. Today's game is a little up close and personal and doesn't lend itself quite so well to a spectacle of athleticism.

"So for the first time in my life, instead of looking at new things to develop, I'm going back 30 years to the purest form of table tennis."

Andrew Baggaley, a top-three table tennis player in England, is the only member of Britain's Olympic squad to take the plunge and enter this weekend's tournament.

It will be a new experience for the five-time Commonwealth Games medallist, with bats provided by the organisers and the ability for players to call upon a 'double point' orange ball once every match.

"It's quite difficult. I haven't played much, I've had a few goes. Everyone's got the same sandpaper bat so it will be a level playing field," said the 29-year-old from Milton Keynes.

"In table tennis some people's bats are faster. That's where spectators sometimes lose the ball because of how fast it goes. This is a lot slower with lots more rallies.

"You can't get much spin. You can get a bit of spin on your serve but you have to play with a different technique. A lot of people are attacking but you have to do some defending and be quite patient."

British table tennis was hit by the news last month that it would receive no UK Sport funding towards Rio 2016.

in Britain unless professional leagues, like the one he plays in in Germany, are brought in.

But the English Table Association are hopeful that Hearn's event could help lift the sport on to a national stage, rather than create a division.

Hearn, however, is less optimistic.

"It could be a real challenge to the modern game," he said. "I don't think the two skills interact too well.

"I think the modern game is not delivering an audience, it's not delivering the TV hours and it's clearly not making table tennis players the superstars of tomorrow. I think we've got more of a chance than they have.

"Inevitably you make mistakes, you always do. But I think we'll produce the finest ping pong championships there's ever been."