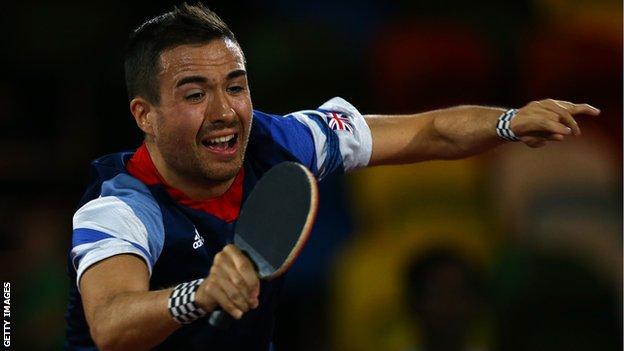 Great Britain has never won a medal in table tennis at an Olympic Games - something which Bayley is sure would boost the sport's profile.

"Table tennis is one of those sports which needs a superstar," he said.

"In this country we don't yet have someone who will win an Olympic gold medal. If we had an Olympic superstar I think the sport would be massive."

He told BBC Radio Kent: "When it was big with the likes of Desmond Douglas it made a big difference. That is why the sport was getting a lot of recognition back then.

Will Bayley says he was affected by the crowd in his Paralympic singles final last year. However, he believes he has learnt from that experience.

"I try not to get too tense or think about the tactics I'm going to try and play," he told BBC Radio Kent. "The more majors you play, the more used to it you get.

"The only time when I have been scared was in the holding area in London ahead of the final.

"There was a ball girl that came up to me and said 'Will, there are 5,000 people waiting outside and everyone is watching on TV'.

"You learn from those sorts of experiences."

"If I'm being honest, I don't think the Paralympics has that effect on people yet, which is a shame."

However, the Tunbridge Wells player does insist that Paralympic table tennis is continuing to grow following the London Games a year ago.

"More people are watching and involved in Paralympic table tennis than before London," he said. "People's perceptions have changed, which is really good.

"We played an exhibition match in London recently and there were 5,000 people there. It shows people still want to come and watch, which is great.

"In the National Championships we had the biggest entry [field] ever.

"It shows more people are playing and wanting to play than ever before. We have got such a good, young team hopefully it can inspire many generations.

"London was a massive leap compared to Beijing. Every four years it will get bigger and bigger and mean the same to people [as the Olympics]. It is definitely catching up."

Bayley's next tournament is the European Championships, which being held in Italy this weekend.

German Jochen Wollmert, who beat Bayley in the Class 7 final in London last year, is among a strong field in Lignano but the Brit is the defending champion.

"I'm looking forward to doing my best and trying to win it again," he said.

"I can definitely beat him [Wollmert] but there are many players I have to beat first. There are seven or eight people who think they can win the tournament.

"I just want to focus on my first match and carry on from there. I know every match will be hard.

"I will take each match as it comes and fight for every point. Hopefully that will take me as far as I can go."