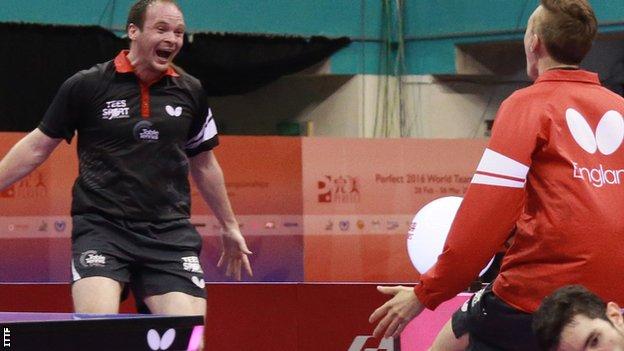 England sensationally defeated France 3-2 to reach the semi-finals of the World Team Championships.

"We came here as a promoted team," said Drinkhall, 26, "Our aim was to stay in the division, now we are in the semi-finals. It is just beyond belief."

England face Japan on Saturday in their first semi-final since 1983.

Drinkhall and his team-mates Liam Pitchford and Sam Walker were not born when England, who are the only European team left in the competition, last reached the last four.

France had beaten England 3-0 in the group stages but Pitchford won both his games against Lebesson and Simon Gauzy.

England only qualified for this year's championships by securing promotion from the second division at the last World Team Championships, held in Japan in 2014.

England are picking up vital ranking points in the race to qualify for the Rio Olympics.

China face South Korea in the other semi-final.