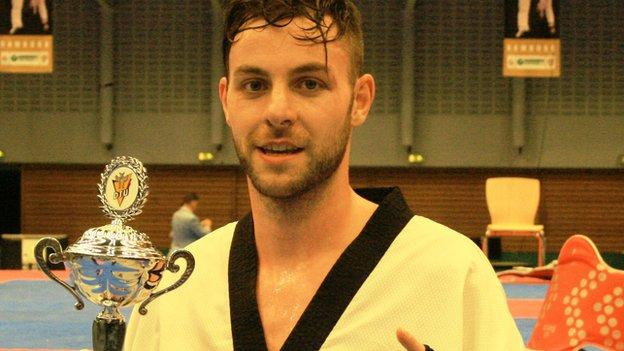 Sansum, recruited through a UK Sport talent ID programme, only took up taekwondo in 2010 but beat fellow Briton Lutalo Muhammad 9-8 on Saturday.

"It puts my stamp on the Olympics," said the 26-year-old from Elgin.

"I've won things before in kick boxing at the top level, but this means 10 times all of that."

Sansum added: "I've been training full-time for the last year and a half and am still learning and it's all coming together."

Cook, who won the US Open title in February, claimed bronze to compete a clean-sweep of the -80kg division medals.

There was further success for Great Britain on Sunday when World Championship silver medallist Jade Jones took silver in Hamburg.

The 18-year-old Flint-fighter avenged her world final loss to China's Yuzhou Hou by eliminating her in the semi-finals, but admitted fatigue hampered her bid to claim gold on the night.

"I'm obviously gutted to get silver as I came here for gold," said Jones. "But it was a tough competition with a lot of fighters who have already qualified for the Olympics."

Jones added: "I gave that fight my everything but I was tired for the final after giving so much mentally and physically."

The German Open was expected to be Olympic bronze medallist Sarah Stevenson's comeback event after a turbulent 2011, however

In her absence, Bianca Walkden is looking to state her claim for a Team GB place, but she could not progress beyond the quarter-finals in the +73kg division.

Great Britain's taekwondo fighters will return to action for the Dutch Open at the end of March before the crucial European Championships in Manchester in May.

The results of those will decide which four athletes are selected to represent Great Britain at the London 2012 Olympics.