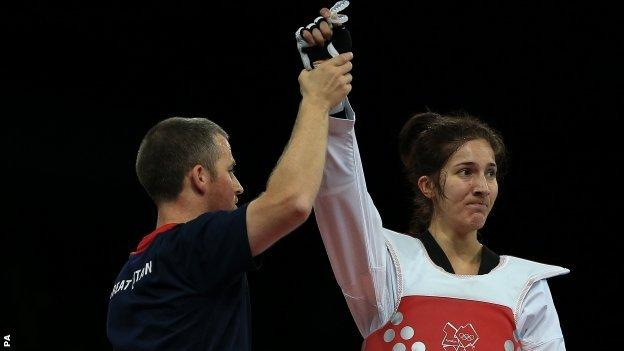 They were this summer's must-have street furniture, but in Sarah Stevenson's hometown they are happy without a gold postbox.

"Someone said to me on Twitter 'we don't need one in Doncaster, they are quite tacky anyway'," explains Stevenson.

While the rest of Great Britain fixated on medals during London 2012, those close to Stevenson, both geographically and personally, weighed up an achievement that could not be measured in neckwear.

But add some context, and it may be that being beaten by American Paige McPherson in her only bout was a triumph worth its weight in any precious metal.

Stevenson's mother Diana was diagnosed with cancer in January 2011, shortly before her father Roy discovered he had a brain tumour.

Their daughter was supposed to be competing in the United States and Germany that spring.

Instead she spent incomprehensible days shuttling between different floors of a Sheffield hospital tending to her sick parents.

At their insistence she competed in the world championships in Korea in May of that year, returning to celebrate a gold laden with emotion.

Roy died in July, three months before his wife lost her own parallel battle with cancer.

And, as if Stevenson had not seen enough of hospital walls, she then had to return for surgery on a cruciate ligament injury in February 2012.

"I only realised at the end that it was an achievement to even be in the ring. I don't think I had realised how tough my life in the run-up had been, Stevenson told BBC Sport.

"It is a shame that I didn't get a medal but what I have been through helps put sport into perspective.

"What is sport compared to what people are going through at home? It isn't anything really."

Except that sport has definitely been something for Stevenson - in the violence of the ring she has found solace.

"Taekwondo has helped me deal with bad things that have happened in my life," she adds.

"It has taught me to be mentally tough and to get through all the hard stuff through the last eighteen months.

"When I was training, my aim for that hour or two in that gym was to switch off from everything else and focus only on taekwondo."

Where cancer had taken her parents, the sport has also provided Stevenson with family.

She married her coach Steve Jennings in November 2010 and found that, as he was one of the committee members who opted to select eventual bronze medallist Lutalo Mohammad ahead of world number one Aaron Cook for the Olympic team, she was dragged into the controversy herself.

"It has been quite upsetting to hear people say that I am just sticking by my man," she added.

"It doesn't matter if I am married to a coach or not, I still have my own opinions. I am quite a strong person and I can say what I want.

"I just think that either one could have won a medal and that is why it was so tough for them to make that decision.

"I don't think they were wrong. Lutalo could have got a gold. Both are amazing athletes, how do you choose?"

Stevenson says that the Welsh teenager's 57kg gold shows that it is not all about "old Sarah Stevenson" in British taekwondo any more.

She will be 33 by the time Rio comes around, and Stevenson, understandably, says she is taking one competition at a time.

But she sounds like she could easily be persuaded.

"It is always in the back of your mind that there is another Games on the way," she concludes.

"I fell into London. After two years training, you think 'it is only another two years' and you might as well carry on. Maybe that will happen again."

Whether it does or doesn't, her determination to make London has won admiration that will last long after the spray-painted postboxes have faded.