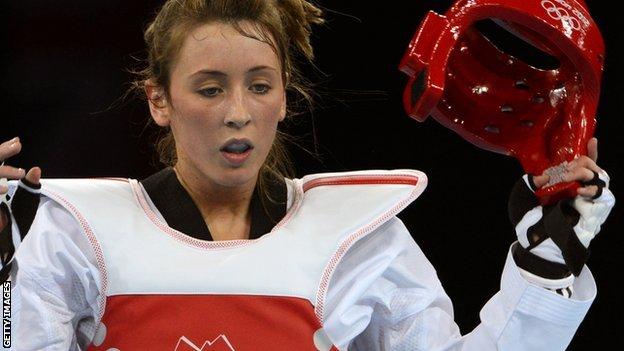 Jade Jones claimed her first major success since taking gold at the 2012 Olympics by winning the German Open.

Jones, who lost in the first round at last month's Trelleborg Open in Sweden, beat Russian Daria Zhuravleva 13-11 to claim the -57kg title.

"After the disappointment of losing in Sweden, I was determined to do well here," said the Welsh 19-year-old.

Now it's all about my preparations for the World Championships. I only got silver last time and I'd love to win gold

The Russian prevailed on golden point after Walkden, who missed out on Olympic selection last year, trailed 5-4 at the end of round two.

Flint-born Jones dropped only four points on her way to the final before edging out Zhuravleva in Hamburg.

"Now it's all about my preparations for [June's] World Championships [in Mexico]," said Jones. "I only got silver last time and I'd love to win gold."

He won six fights in all, including two by sudden death, after dropping down a weight division.

Harvey's bronze was matched by Damon Sansum in the -87kg class as Britain enjoyed a successful tournament.

Liverpudlian Stamper, who narrowly missed a medal at the London 2012 Olympics, beat Harvey 9-4 in their semi-final before seeing off Russia's Vasilii Nikitin 11-4 in the final.

"I am so glad to be fighting at my best again," said Stamper. "This is one of the toughest opens in the world."