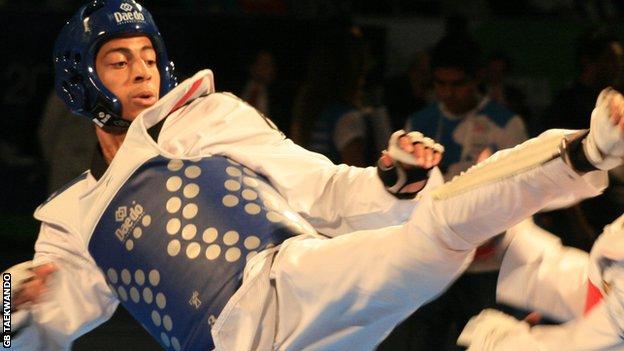 Great Britain's Ruebyn Richards was controversially denied a World Championship bronze medal after a series of decisions went against him.

Richards lost 4-0 to home-favourite Uriel Adriano in the -74kg quarter-finals despite twice appearing to strike his opponent's head.

"I definitely don't think some of the decisions were bang on," Richards told BBC Sport in Mexico.

The Briton used his one appeal card in the opening round for a head shot.

Television replays suggested Nottingham-based Richards, 20, should have scored four points for the appeal.

"It's always going to be hard against the home competitor but I thought I could win - it's just unfortunate the way things have gone," Richards added.

Another kick late in the third and final round also looked to have made contact - and should have attained three points - but the officials did not award any.

"Two cameras inconclusive, one camera showed clear touch contact!" tweeted Great Britain's frustrated performance director Gary Hall, who was full of praise for Richards in what was his maiden World Championships. The tweet was later deleted.

It certainly was an impressive day for Richards, who opened with a defeat of Canadian Maxime Potvin and went on to eliminate former world and European medallist Mokdad Ounis of Germany in the round of 16.

"It's been a good performance all the way through, beating the first seed in the first match and I felt like I performed well all the way into the quarter-finals as well, it's just things weren't going my way," Richards said.

It's always going to be hard against the home competitor but I thought I could win. It's just unfortunate the way things have gone

Richards started the sport at the age of four, but only transferred to the Olympic form of taekwondo in 2010 after being recruited as part of the UK Sport-backed talent identification programme Fighting Chance, which also discovered Olympic bronze medallist Lutalo Muhammad.

He teamed up with coach Hyun Goo earlier in the year and secured his maiden senior title at the German Open in March.

"I have to put it down to the work with my coach Hyun because he's evolved my game so much and without his input I wouldn't have been able to put in a performance like that a few months ago," stated the fighter.

"I've really moved on and it's fortunate that it all kicked off with that Fighting Chance scheme that brought me into this academy and gave me the opportunity to come to events like this."

With the -74kg division not part of the Olympic programme, Richards is likely to opt to return to the -80kg category in the future, but has yet to decided when that may be.

The fighter, who narrowly lost out in the London Olympic bronze medal match, revealed he almost quit the sport after that disappointment, but believes he is now back in peak condition and can win further honours.