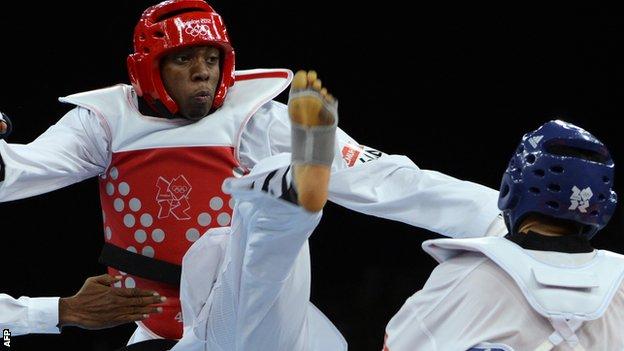 Lutalo Muhammad banished memories of a disappointing World Championships by securing his first British title at the National Taekwondo Championships.

The 22-year-old dropped less than 10 points in four fights on his way to the -87kg crown in Manchester.

It marked a return to form for Muhammad ahead of the inaugural World Grand Prix in Manchester from 13-15 December.

Muhammad won a bronze medal at the London 2012 Olympics - but suffered a shock last-16 defeat in Mexico in July.

Olympic champion Jade Jones missed the championships due to a back injury.

The World Taekwondo Grand Prix in December precedes three further Grand Prix events ahead of a Grand Final in 2014, with results from each competition across the eight Olympic weight divisions counting towards qualification for the 2016 Games in Rio.

"All I am doing now is looking forward and my main focus is the World Taekwondo Grand Prix," said Muhammad, who secured European Championship gold in Manchester in 2012.

"It has all the makings of another World Championship so I want to be at my best."