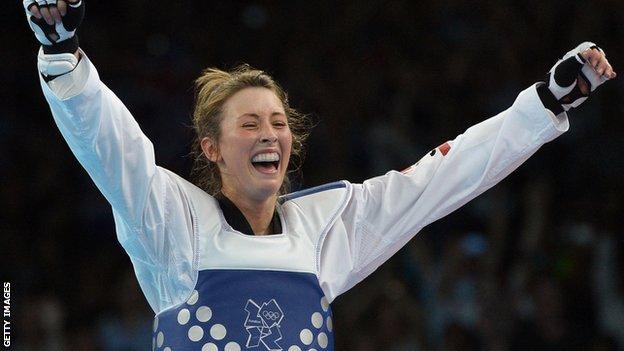 Olympic champion Jade Jones aims to prove she is back to her best at the European Championships in Azerbaijan, which get under way on Thursday.

Jones, 21, missed out on a medal at the 2013 Worlds, but won silver at the Manchester Grand Prix in December and recently returned to world number one.

"I had a bit of a lull after Olympics and last year didn't go to plan," she said. "Now I'm feeling strong again."

The -57kg fighter from Wales is part of a 14-strong British team in Baku.

Jones came third at both the 2010 and 2012 Euros and is desperate to finally finish on top of the podium when she competes on Saturday.

"I've learnt a lot of lessons over the last couple of years and feel I've improved a lot mentally and physically," she told BBC Sport.

Lutalo Muhammad, the -80kg Olympic bronze medallist, secured his selection for London 2012 with a surprise -87kg victory at the event two years ago.

"There's definitely a bit more pressure on me this time going into the Euros, but I'm very confident I can defend my (-87kg) title," the 22-year-old told BBC Sport.

The World Taekwondo Federation [WTF] have yet to clarify whether ranking points attained in one division can be carried over to another.

If they are not, Aaron Cook, who is representing the Isle of Man in Baku, could gain an advantage in the race to secure Britain's sole berth in the -80kg division at the 2016 Rio Olympics.

Michael Harvey, 24, will look to retain his European crown in the non-Olympic -63kg division, while expectations are also high for Mahama Cho - currently third in the heavyweight world standings.

The 24-year-old defected to France after missing out on selection for the London Olympics, but returned to the GB set-up last year and won gold at the inaugural World Taekwondo Grand Prix in December.

"I feel like I'm playing catch-up after missing the Olympics and then the Worlds last year, so I'm really excited about taking on the best that Europe has to offer," said the +87kg Ivory Coast-born fighter.