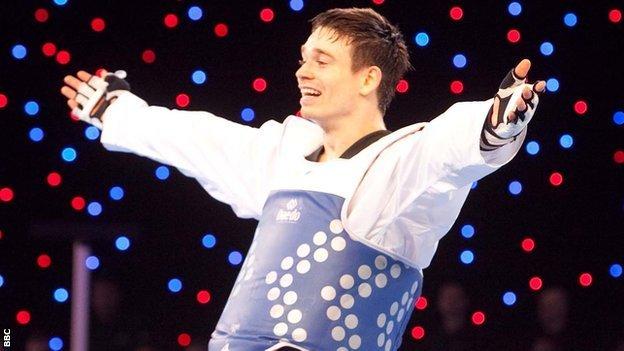 Cook, 23, who has represented the Isle of Man since he was controversially overlooked for the London Olympics, won after the final went to an extra round.

I'm in good form and really delighted to get some valuable ranking points on the road to Rio.

The British team now have five medals after three days of competition.

Bianca Walkden, 22, won her first European title with victory in the +73kg category on Friday, while Lutalo Muhammad and Asia Bailey have secured bronze medals in the -87kg and -46kg categories respectively.

Sansum led Cook 3-1 after the first round of their final but the pair were locked at 8-8 and 12-12 after the second and third. That forced them to compete in an extra round, and Cook came out the winner.

"I'm really happy to have won as it was a tough battle," said Cook. "I'm in good form and really delighted to get some valuable ranking points on the road to Rio."

Sansum, who beat Cook in last year's French Open final, said: "Golden point is not the best way to lose a final. I thought it was going to be my day.

"I performed as well as I think I ever have, with 12-point finishes in three of my five fights and beating the world champion on the way. I felt nobody could deal with me in the ring."

Jones led Gomez 6-3 and then 9-6 midway through the final round before losing.

"I'm gutted with just the silver to be honest but I guess at least I'm picking up points," she said.

"I'm disappointed with myself really. I managed to get myself ahead a couple of times, with good head shots, and then I made a mistake at the end and she got me back."