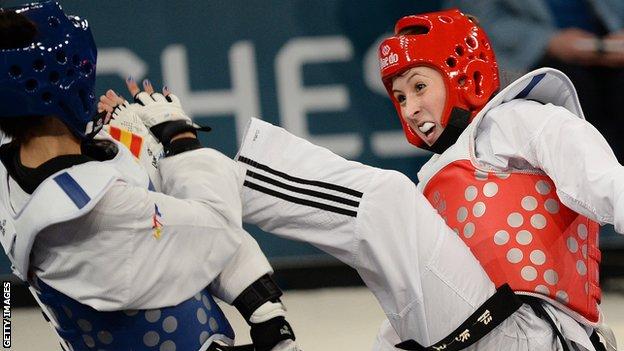 Jones finished second at the 2011 World Championships, before her success at London 2012, but missed out on a medal at the 2013 Worlds in Mexico.

The -57kg world number one leads a 13-strong British team at the event which starts on Tuesday in Russia.

"Becoming world champion would be amazing and it would really take the pressure off," Jones told BBC Sport.

"I would have so many points that I'd basically automatically qualify [for Rio] so I could pick and choose which competitions to do next year."

Athletes ranked in the top-six of each Olympic weight division at the end of the qualification period in December this year will automatically qualify for Rio 2016.

Each nation can only pick one athlete per weight division, but with no other potential candidate Jones would be assured of that berth unless she was unable to compete due to injury.

Jones heads to Chelyabinsk in career-best form, having won her last six tournaments and having finally claimed a first victory against long-term nemesis Eva Calvo-Gomez of Spain.

"Just because I have beaten her doesn't mean I know her game completely because she will always will be hard to beat," said the Welsh fighter.

"It's just that after losing to her a few times I made too much of an issue of it in my head - now I'll try to relax a bit more."

While Jones' Rio Olympic place looks secure, the same is far from true in the men's -80kg division.

World number two Aaron Cook has ruled himself out by opting to compete for Moldova while London 2012 bronze medallist Lutalo Muhammad is out injured.

Sansum, who says Cook has taken an 'easy' option by defecting to Moldova, added: "The competition for places is so fierce in the squad right now and that's pushing us all to improve."

The event will also see the return of +67kg fighter Bianca Walkden who suffered the third knee ligament injury of her career last year.

"I guess I'm getting used to comebacks now," she said.

"I know I'll get stronger during the year and there's still a good chance of qualifying for Rio if I do things right."