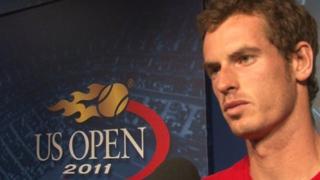 Following his four-set win over John Isner in the quarter-finals of the US Open, Andy Murray says he is satisfied with a "solid" performance and hopes he can overcome Rafael Nadal in the semi-final.

Murray is meeting Nadal in the semi-finals of a Grand Slam event for the third time in a row, and is optimistic the hard court surface can help him overcome the Spaniard.

The world number four also tells BBC Radio 5 live's Jonathan Overend he believes he is the "worst of a great bunch" at the top of men's tennis, and is working hard to claim his first major tournament victory.