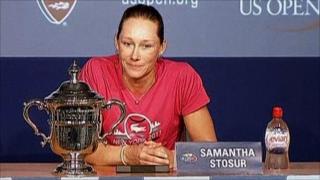 Australia's Samantha Stosur is delighted to have won her first Grand Slam title after beating Serena Williams in the US Open final.

The ninth seed beat the three-time champion 6-2 6-3 and upset the odds at Flushing Meadows to become the first Australian woman to win a Grand Slam since 1980.

Stosur was also complimentary about how Williams reacted to defeat, saying she behaved like a "true champion".