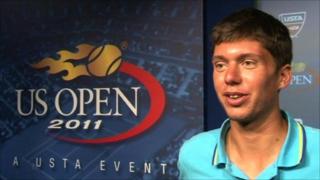 Britain's Oliver Golding says he is "amazingly happy" after winning the US Open boys' title with victory over the junior world number one.

The 17-year-old came from a set down to win 5-7 6-3 6-4 against his former doubles partner and top seed from the Czech Republic Jiri Vesely.

The 13th seed follows in the footsteps of fellow Briton Andy Murray who also won the boys' title at Flushing Meadows back in 2004.