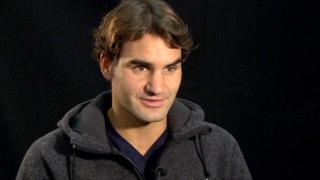 Five-time champion Roger Federer says there will be a "lot of pressure" on the first game of the ATP World Tour Finals event in London due to the round-robin format.

Federer will face Jo-Wilfried Tsonga in their opening match in Group B, while Rafael Nadal will face Mardy Fish and says he is "excited" to be back in London. Fish describes the chance to play in the season-ending tournament as "very special".