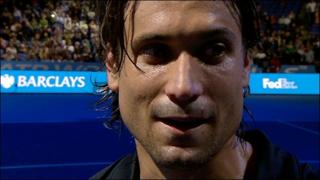 Spain's David Ferrer apologises to the O2 crowd and Andy Murray after he beat the British number one in straight sets in their ATP World Tour Finals opener in London.

Ferrer, who was runner-up in the 2007 season closer, was pleased with his serve but admits he was a bit lucky that Murray was struggling with injuries.

Murray needed treatment after losing the first set and he became increasingly angry with himself as he twice saw breaks of serve overturned in the second, before eventually losing 6-4 7-5.